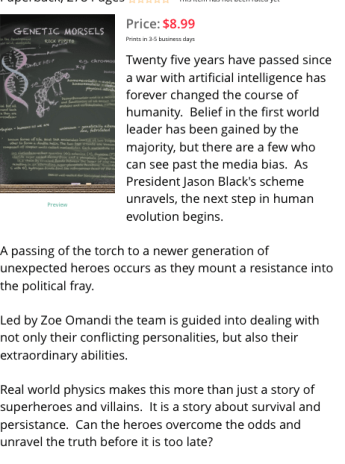 Day 28 of #scrypthalloween gets into #dnasplicing and #evolution in my #novel GENETIC MORSELS. Some facts: 1) it was originally published on June 22, 2015. 2) @dpipito of @pintsizedpages came up with the design and #art for the cover to reflect a chalkboard with biology notes. 3) I grew up a fan of comic books and wanted to write a novel about people with abilities. When I approached this #book however, I did it based on real laws of physics. It’s very grounded and lacks colorful spandex to create a feasible plot. 4) the original title was “Fatty Morsels” and it was going to be a wrap up of loose ends from the first six novels. When I decided it could kick off a new trilogy I changed the title and merged the idea to involve genetic manipulation and evolution. 5) there is an underlying political theme that runs throughout the plot that echoes a lot of what we see in politicians today. Jason Black is more than just a world leader, he’s a villain with public trust and nefarious intentions. #authorsofinatagram #dna #superheroes #supervillains #political