On the 6th day of Christmas… 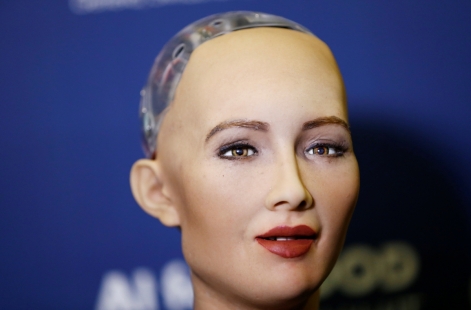 Artificial Intelligence and computers have come a long way.  Just look at Sophia on the right.  She’s an AI robot that can communicate as if she were human.  You need to look up the videos if you haven’t yet.  Is technology our next step in evolution?  Do you think we’ve gone too far or should we push farther?  What are your thoughts?  My novel TECHNO FEAST and its spinoff VIRAL UPGRADES addresses some of these things.

Order a copy of my novel or short for yourself or a friend.  If you want personalized copies then shoot me an email (Rickpipito@hotmail.com), otherwise they can be purchased in print or digital at Lulu.com or on Amazon.

Day 12 of #scrypthalloween looks at my short story VIRAL UPGRADES. This feels less like a spinoff and more like an expansion of my novel “Techno Feast.” When I wrote the source material I cut out a lot of scenes that I thought would be redundant to a larger book. Some of them were great scenes but I felt like they could tell a story on their own. This contains those parts and more to really give the reader a full immersion in that world of artificial intelligence take over….

official description: Mankind has taken advantage of technology for ages. Life has become simple, but so has the human mind. I’ve come to change that. Your phones, televisions, computers, transportation, communications, and vehicles are all connected to a network. That network is now controlled by something far superior than flesh. I am the Network Entity, and the planet is now under my control. Any who resist will be terminated…

#book available in print at lulu.com and in digital/print on Amazon and Barnes and Noble sites as part of the Pandora’s Chaos trilogy.

#scrypthalloween is passing quickly.  For today’s post I wanted to talk about the franchise that really made me think about advancements in technology.  Obviously it is still science fiction (in most cases), but we come closer to this every day.  While writing my novel TECHNO FEAST, and its spinoff VIRAL UPGRADES, I went back and rewatched the entire Terminator series for inspiration.  I wanted to make sure I wasn’t duplicating anything that had been done, and it helped to get the gears turning.  I’d include the Matrix in this list, but it never held up the way this series has.

THE TERMINATOR was one of the first R-Rated movies I ever saw.  For its day it was a chilling piece of work, and despite some out dated special effects it remains near the top of my list of greatest science fiction movies.  The T-800 that Arnold Schwarzenegger played (and has played since) is something I’d never want to face in real life.

TERMINATOR 2: JUDGEMENT DAY took that concept and made it even better.  If anyone said this wasn’t their favorite of all the movies in this series, then they’d be lying.  I’m pretty sure the possibility of a T-1000 type robot would make anyone afraid.

TERMINATOR 3: RISE OF THE MACHINES was my least favorite of the franchise.  I still enjoyed parts of it, but it felt forced to me.  The T-X or Terminatrix was a nice change in cyborg threat, but she didn’t really feel like an evolution of the machines to me.  The fact that Arnold had to personally fund one of the best scenes in the movie says all there is to say about this one.

TERMINATOR THE SARAH CONNOR CHRONICLES was a short lived series that introduced the T-OK715, a female infiltrator bot that brought a new twist to the story.  This basically ignored Terminator 3 as time travel changed the future (not for the first or last time).  Being on a tv budget and writing that lacked in substance really hurt the series, but the cast did a great job with what they were given.

TERMINATOR: SALVATION was not as bad as people say.  I thought it was a great movie in fact, until the ending which made me shake my head.  Marcus was introduced as a human terminator hybrid designed by Skynet, and gave a different feel to the overall continuing plot.  While some creativity was shown in the making of the movie they could have done more with the ending.  Overall though I was pretty happy.

TERMINATOR GENISYS was met with mixed reviews, but when I say it’s damn good I mean it (from a nostalgia POV).  This movie basically hit a reset on the whole timeline, and in a good way.  We can keep Arnold in his best role as an aging terminator has been explained.  We also get him as more of a badass if the series continues because he’s now more than just a T-800.  And Jason Clarke as John Connor aka the T-3000 was a great twist that makes you forget easily about the T-1000.  It’s like they learned what was done wrong and took into account everything up until this point.  It’s my second favorite of the whole franchise.

All in all, I really hope we get another Terminator film sooner rather than later.  There was even talk for a while there about having a Robocop vs Terminator film.  That has been popular in comics and video games, but I’m not sure its needed quite yet.  They need to bring back their core fans first by making the rest of what Genisys started great.

What did you think about the Terminator movies?  What’s your favorite computer or artificial intelligence related movie? Let’s discuss.

I received a request a couple of months ago to do more with the Network Entity, which was the main antagonist in TECHNO FEAST.  At the time I was wrapping up a storyline that would appease such a request.  I felt that one final twist could be included in the story.  This is NOT that story, but should appease the request until the actual follow up is released in a few days.  (Spoiler to my #scrypthalloween posts?  Yes)

Here’s a few things that the Network Entity did during the novel, that weren’t elaborated upon.  They are now presented in standalone print form at Lulu.com or you can get them as part of the Pandora’s Chaos trilogy extras on Amazon.com

Mankind has taken advantage of technology for ages. Life has become simple, but so has the human mind. I’ve come to change that. Your phones, televisions, computers, transportation, communications, and vehicles are all connected to a network. That network is now controlled by something far superior than flesh. I am the Network Entity, and the planet is now under my control. Any who resist will be terminated…

Direct link to the print: http://www.lulu.com/shop/rick-pipito/viral-upgrades-a-techno-feast-accessory/paperback/product-22863155.html

It is also available as part of the Pandora’s Chaos Trilogy extras download on Amazon.