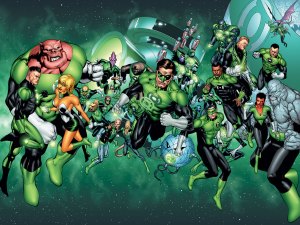 Green Lantern is one of the central characters os of the DC Comics universe, and what better way to show appreciation than to mention him in song.  Below are a list of songs about more than just one Green Lantern.  If you know of any others, please mention them in the comments below.

In Brightest Day by Gary Mitchell: This song has a feel like it should be the end credits to a movie or a live action TV series.  Catchy tune.  http://www.youtube.com/watch?v=vo0BaloOd2E

Green Lantern Remix by Blue Harvest:  If you can find this one, which I can not find a link, please post it here.  This song is all about the Green Lanterns, and specifically mentions Alan Scott, Hal Jordan, Guy Gardner, Kyle Rayner and John Stewart.

Green Lantern by Evenrude: Another song I had trouble finding a link to.  The lyrics are sort of confusing.  It’s obviously about a girl, but other than the title and the chorus, there really isn’t much else GL related.

Green Lantern Hal Jordan by J-Sin Starr: Beginning with the classic cartoon intro, it goes into a laid back verse and rocking chorus.  http://www.myspace.com/jsinstarr/music/songs/green-lantern-hal-jordan-6101454

Green Lantern The Animated Series Theme Song: This is Bruce Timm’s latest crack at DC animation, and so far so good.  I’ve found it enjoyable, and my son loves it.  Here is the theme song http://www.youtube.com/watch?v=fFloX26ATf0

Green Lantern Emerald Knights Theme Song: Similar in orchestral arrangement, this is the second animated movie based on the character.  http://www.youtube.com/watch?v=MXzAIrLSzio

Green Lantern by The Mutton Birds:  This New Zealand band created a song that I could see in a credits to TV show.  http://www.youtube.com/watch?v=8xWYIidveeM

Sector 2814 by The Roy Clark Method: This song is about Hal Jordan’s fall after the Reign of the Supermen story.  http://www.youtube.com/watch?v=cJJ03fipI-Q

Ring Capacity by Ring Capacity:  This band definitely consists of a bunch of nerds, but the song and video are pretty sweet.  http://www.youtube.com/watch?v=c8LNPeVPMIo

DJ Green Lantern: From Rochester New York, this hip hop DJ named himself after wearing a green hoodie and the insignia.

Green Lantern 1967 intro: There were only one or two of these made for the Aquaman/Superman hour in the late 60s.  Green Lantern got his own proper intro.  http://www.youtube.com/watch?v=lAqngSSlsto

So there you have it folks, a few given ones, but perhaps a few you’ve never heard either.  Hope you enjoy!