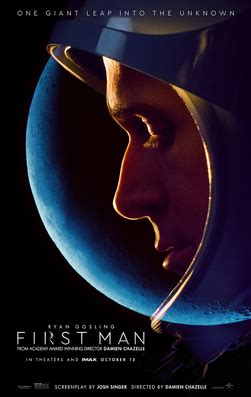 My son has had a fascination with space this year, so when an eight year old comes out of a true story movie loving every second, that says something.  First Man was a bit slow in parts.  There were some scenes where if you have vertigo, you may want to close your eyes.  Despite thinking you know what’s going to happen because you may know a lot about the Apollo program, well think again.

Ryan Gosling was not the only stellar cast member.  Everyone in the film did such a fantastic job that I’m shocked it hasn’t been nominated for an Oscar.  Oh wait, no I’m not.  The Oscars only put what and who they want up there even if no one has seen the films.  Okay, ranting aside, First Man definitely deserved a nomination on so many levels.

Yes, it’s based on the true story of Neil Armstrong, but it delves into his family life, and the stresses he went through.  It wasn’t an easy trek for him to achieve the status he did and become the first man on the moon.

I had no complaints about this film, other than the fact that the conspiracy loving part of me wishes they would have touched on some of those doctored NASA photos of the moon and flight recordings of him and Buzz Aldrin talking about seeing objects outside of the shuttle.  That would have detracted from what they were going for, so I understand why they didn’t… but still..  we all want and need answers.

I may have shed a tear of joy when he stepped on the moon after seeing all that built up to it.  Kudos to the director and cast for a job well done.  I give the movie 5 out of 5 sCrypt ratings.  What did you think of First Man?  Comment below with your thoughts.