Posts tagged “Once Upon a Time in Wonderland”

Review: Once Upon A Time Season 3 (& Wonderland)

There is a LOT to cover here, but I’ll make it as brief as possible.  First off, if you AREN’T watching Once Upon a Time, then you need to stop reading and start at season 1.  I guarantee you will get so wrapped up in the characters and stories that you will not stop until you are caught up.  There will be spoilers in here so skip to the end paragraph if you want my rating of both shows.  Yes, I threw Once in Wonderland in here because to me it is part of season 3 albeit on its own.

I’ll start with part 1 of season 3 Once Upon a Time.  The main villain here is Peter Pan and the Lost Boys.  The reveal of who Peter truly is in relation to Rumplestiltskin really shows why Rumple is the way he is.  Wendy’s story arc is good here, and Peter as a villain works surprisingly really well.  He was the villain you loved to hate.

We also see a turn for the better with Rumple and Regina here, that leads to them being more heroic than ever.  In fact, it is safe to say they are now heroes for season 3, and likeable ones at that.  Neil (aka Baelfire) however becomes the ultimate hero by sacrificing himself to save everyone.

What took me by surprise is that at the mid season break, it finished up that storyline, so instead of one long season arc, we actually got 2 shorter arcs, but I think this was a good thing to keep the show fresh.  The episode with Ariel and Eric was satisfying, and seeing that the Evil Queen Regina took on the form of Ursula the sea Witch was fun as well.

Now we get on to Once Upon A Time In Wonderland.  It really is ashame that this didn’t get renewed for a second season.  I think the time slot was a bad choice.  This should have aired at the mid season break slot of Once Upon A Time, but instead was on a different night where not many people tuned in.  It DID however give us a good look at Wonderland and those characters, and they wrapped the whole storyline up.  Basically, they didn’t leave us hanging to wonder what happened, and they left it open to include the remaining characters in the main show at some point.

Anyway, so we have Alice being taken back to Wonderland to save her lost love, who is a genie.  Now keep in mind that this genie, AND the Sultan, are NOT the genie and Sultan from Aladdin, BUT, Jafar is the main villain.  Speaking of which, Jafar is one of the best villains on this or the main show to date.  His portrayal and agenda echoed what is known of the character, and he is not limited by simple morals.  There is a soft side to him, however, which keeps the human part of him real.

Anastasia/The Red Queen was an annoyance at first, but the last few episodes had me liking her.  The White Rabbit, Caterpillar, The Bandersnatch, The Knave of Hearts (Will Scarlet), and Alice herself all had great purposes in the series and I enjoyed every moment they had on screen.  We even had a little back story with Robin hood and his merry men, which was a break from the norm of the show.  The character of Elizabeth “Lizard” was odd at first, but a welcome sight…. until she died, which choked me up a little (I’ll be honest… I never like seeing a pretty woman die).

Cora appearing as the Queen of Hearts was expected, and she lived up to the menacing person she portrayed in the main series.  Of course this was all in flashback here, but it was needed for back story.  The Well of Wonders and the genies had a nice little plot thrown in there, but we could have probably skipped over that whole angle (though the demon of the well was creepy as hell).

At first I was disappointed by the Jaberwocky, but five minutes after her first appearance on screen, I grew to really like her as a creepy, fear inducing villain, and I hope she comes back at some point.

My only problem with characters here are the Tweedles.  I didn’t like how they looked, and I felt they were used inappropriately for the most part.  Their roles could have been better planned.  As far as overall plot, Jafar trying (and succeeding) in rewriting the laws of magic seems to directly affect the events in the main series.  In other words, despite the connection being little to both shows, they seem to acknowledge the events of one another to some extent. One last thing to mention is that there were definite ties to Storybrooke and the real world.  I doubt we will ever see Alice again or the Genie, but Wonderland will be back in some form in the main show, I’m sure of it.

Returning to the main series, let’s talk about part 2 of Season 3.  Here is where I was highly interested, perhaps more than I’ve been in the whole series.  Why?  I’ve personally read all 15 of the original L Frank Baum Oz novels, so bringing that in here was more than a welcome sight for me.  Before I get into the main plot of this half, I’ll touch on the characters.  Aurora, Phillip and Mulan were underused as usual.  I almost don’t even want to see them in the show anymore unless some kind of good use 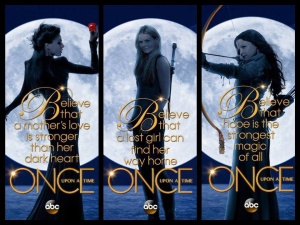 for them is found.  Rapunzel’s addition felt rushed, and I HATE when they change the race or sex of a character.  (IE I don’t want to see a Black Indiana Jones or a white Blade).  It annoys me, and especially with Tangled being so fresh in my mind of Disney movies, I had an image of Rapunzel in my head.  Other than that, I don’t have an issue.

The new take on Lumiere (the candleabra) was interesting and refreshing.  Blackbeard and Glinda, though minor roles, served their purposes and worked well in the story.  Dorothy Gale coming to Oz was both hit and miss for me.  I liked what they did with her, and how the fairy tale was twisted, but again, this felt rushed.  I only hope we see more of her and Oz characters because in the long run, there is a lot of Oz that could still be used (even from the original characters we all know and love, that have yet to appear).

Now on to Zelena (The Wicked Witch of The West).  She truly was wicked.  I like the explanation of her green appearance (envy) and why she was so wicked.  She had similar goals as Jafar in Wonderland, but for different reasons.  The use of the flying monkeys and even the great wizard of Oz himself helped her to achieve her goals, but she still met her demise at the hands of Rumplestiltskin.

Of course, then we had the whole Captain Hook and Emma going back in time, but they sorted out the past and returned to a wonderful future.  Charming and Snow White named their newborn son Neil.  Emma embraced her magic and purpose and decided that her and Henry were going to stay in Storybrooke.  Rumplestiltskin and Belle married.  Regina and Robin Hood were happy together.

It was all a peaceful ending that made me worry.  I worried because I thought “This is it.”  Everyone has a happy ending.  There is no need for another season.  I’m so glad I was proven wrong, but now I have to wait until the Fall for more episodes.  Like Once Upon a Time normally does, we are left with massive cliffhangers.  In the last two minutes of the show’s season, we learn this.  Rumplestiltskin still has his own dagger, even though his wife believes that she is the one that has it.  This is sure to cause a problem in the future.  Regina, finally void of her Evil Queen status is suddenly screwed by Snow White’s family again, because the one person that Emma saved in the past was supposed to die.  That person was the Maiden Marion, who was married to Robin Hood and mother of his child.  This then takes Robin Hood away from Regina, and her vengeful “Evil Queen” may or may not emerge to exact vengeance upon Emma for ruining her happiness.

Somehow I think they will avoid this mostly.  Why?  Henry still believes and loves his step mother, Regina, as a good person now.  His love for her will stop her from being as vicious as she used to be.  Also Tinkerbelle predicted that Regina is destined to find happiness with the man with the wrist tattoo.  Now of course, this could have been redacted because of the whole time travel alteration, but I think that somehow they will work on getting Robin and Regina back on track.  After all, he can’t just ignore the feelings he has for her.

Let’s see.  What else?  Other than a fun Back to the Future reference, and a cameo by a stuffed Mickey Mouse doll, there was perhaps the biggest reveal of all.  Regina tells Emma that “You better hope you didn’t bring anything else from the past back with you.”  We find out that one of Rumplestiltskin’s artifacts came through the portal.  From it escapes a woman in a flowing blue dress and pale skin.  We don’t know what her face looks like, but if anyone has seen Frozen, then you know it is the Snow Queen herself, Elsa, as she freezes and shatters the artifact from which she emerged.

Other than the Frozen story coming to season 4, it has also been confirmed that the Knave of Hearts will be making his way onto the main show, and that Disney’s Brave and Princess and the Frog (retelling of the Frog Prince) will all be included in some manner.

This show keeps getting better, and I’ve learned to expect nothing except greatness and frustration on waiting for the next episode.  I give season 3 of Once Upon a time 9 out of 10 sCrypt Coffins, and Once Upon a Time in Wonderland gets 6 out of 10 coffins.  The reason I rate Wonderland lower is because of the obviously limited budget for the effects, and it really didn’t get compelling enough for me until the last 7 episodes.  What did you think of these shows and what do you speculate for the future of the series?

May 14, 2014 | Categories: Reviews | Tags: Disney, Fairy Tales, Once Upon A Time, Once Upon a Time in Wonderland, review, Season Finale, tv series | 3 Comments