While these authors are not necessarily with the same publisher as I, they are people whom I’ve met over the years, become friends with, or acquaintances.  If you’re looking for something to read, this list of authors has all genres covered… Plus, they are just awesome people.

Who are some authors you like to read or have met?  Please share in the comments below. 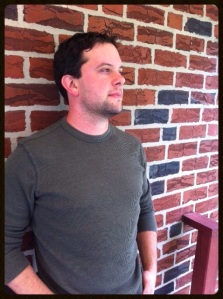 I’ve been asked to be a part of the “My Writing Process Blog Tour” by Michael Thomas Knight.  Michael is a true horror fan at his core.  He’s not only written a ton of great material, but also reviews a lot of horror films and books (mine included at one point).  Between his writing, his tastes in horror and his musical background, I find a lot in common with him, and was honored when he chose me to take part in this great blog tour.

Each of us chosen is given the task of answering a few questions about how we go about writing.  Here’s a little insight into my mind…

Rick: Currently, I’m waiting approval from copyrights to go ahead with the next two graphic novel spinoffs. While that long process is going, I’ve also been working with some amazing talents to release an audiobook version of my first novel, as well as a rerelease of books 4-6 for later this year in a Trilogy format. GENETIC MORSELS is my next big novel project, aimed for release in 1st quarter of 2015.

Rick: I aim for a wider audience. Everyone has read countless horror stories involving vampires, zombies, ghosts, demons etc… My versions of those creatures includes the legends associated with them already, and expands by tying them in to historical mysteries and events. Each of my novels takes ten different scenarios involving a certain threat and ties them together in one overall plot, which continues throughout each book. You also don’t have to read all of them to enjoy the series. You can start with book 6 and understand what is going on. Then if you want to go back to find out more, that is always an option.

I tend to want people to fall in love with the characters I create.  That’s why I chose to write in a series.  The problem with a series is that people get turned off it they haven’t read book one and book five or six is out.  It’s a lot of catching up to do.  This is why I write them in a way where you don’t have to be familiar with the other novels.  The events you need to know are included in each.  Think of the Indiana Jones movies.  You don’t need to watch them in order.  You know who he is just by a few seconds of screen time, and each is perfect alone or as a whole.

Rick: My goal is to expand to all genres of writing, but my main focus leans towards horror and thrillers. I feel that is the genre where a reader can fully experience the tense nature of a bad situation. They connect with characters who may have something tragic happen to them, so it’s highly relatable. Plus, there is nothing like having a fan send you an email saying, “Thanks for giving me nightmares last night.” It’s good to know I’m in their dreams. Haha

Rick: I actually plan out books years in advance. Right now I’m working on a new book that focuses on genetic mutations, that give people abilities or handicaps beyond the normal human. I had the ideas down on paper in 2012, so while I was writing book 3, I already had book 7 and 8 planned out. Sorting out the details takes time and often the ideas change, but the core is there with plenty of time for my mind to get it right. A quiet night, with a glass of red wine and my laptop helps me to get all of it out on paper.

Mainly I spend my whole day brainstorming.  I have sticky notes in my pockets at all times, and my phone ready to record my ideas if I’m driving.  I’m constantly thinking about how to better the next story, and the anticipation itself drives me to meet the goals I set and then some.

And now for the final part of the blog tour on my end.  I have nominated two outstanding authors to participate.  Look for their posts in a week at their sites.

First up is Lucas Mangum.  He writes horror, crime and fantasy fiction, sometimes horrific crime fantasies. His work has appeared on the websites Shotgun Honey and MicroHorror as well as the anthologies Strange World, crappy shorts-deuces wild, and Bones. His novel, Flesh and Fire, is due out in 2015 as part of Journalstone Publishing’s Double Down Series.

He is the co-writer of the sci-fi/horror film Epigenesis (Honors Zombie Films) and has appeared in the independent sci-fi thriller Apocalypse Kiss (Potent Media). He also contributes film reviews for the websites Cinedelphia, Biff Bam Pop, and Apocalypse Now.

Second is Mike Yowell.  Mike began reading horror comics and magazines as a very young boy. Most notably were Creepy, Eerie, and Famous Monsters of Filmland by Warren Publishing.  As he grew older, he found a Stephen King book while his parents brought him to their friends’ party. The book was Night Shift, a wonderful collection of terrors that hooked him the moment he started reading “The Boogeyman”.

From that moment on, all he wanted to do was write scary stories of his own. Over the years, other authors have become major influences. A partial list would contain Jay Anson, William Peter Blatty, Peter Benchley, Curtis Richards, Clive Barker, Graham Masterton, Richard Matheson, and Edgar Allan Poe.  Check out Mike Yowell at: http://www.michael-yowell-horror-stories.com

For anyone who hasn’t checked out Parlor of Horror yet, I highly recommend that you do.  Michael Thomas-Knight’s blog is for any horror fan, from movies, to television, books and music.  His book and movie reviews are absolutely fantastic, but the highlight (and why I love the site) is his flash fiction section.  He has some of his own written work there for his followers to admire and enjoy.

sCrypt Comics is proud to be a new addition to his blogroll (a sidebar of sites he enjoys).  Please go check out his blog, and give him some horror love.