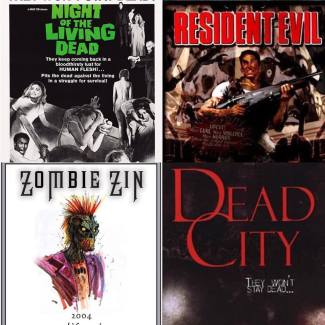 Back in 2009 while I was working on my first novel, I had some great zombie influences.  I always try to take in multiple media for entertainment.  George A Romero’s “Of The Dead” movie series have always been a guilty pleasure.  The “Resident Evil” video game series and “Zombie Zin” wine still make it into my house to this day. And Joe McKinney’s “Dead City” was the first zombie novel I read that really made me like the genre.

Runners up were “Marvel Zombies” and Michael Jackson’s “Thriller”.

What are some of your favorite Zombie stories or influenced things?  Make sure to tag #scrypthalloween.

The zombies have spoken, and Marvel has fallen way short.  In our recent poll, fans thought that Marvel Zombies didn’t stand a chance of survival (or should we call it unsurvival).  Someone added a vote for the zombies of the Resident Evil universe, which I overlooked.  I had forgotten that Resident Evil has been in a fair share of comics from various companies.

What makes us here at sCrypt comics even more proud is that the zombies of our “Flesh And Leftovers” universe beat out Resident Evil and Marvel Zombies.  Overall however, the winner was DC Comics’ the Black Lantern Corps.  Their black rings managed to absorb the undead around them into their group.  Now all who opposed the Black Lanterns are now members of their zombified legion.

Thank you for your participation.  The poll will remain open in the previous posting if you’d like to continue adding or voting.  Stay tuned for our next poll!

Our next poll brings in multiple characters that all have something in common…  They are dead… or undead if you will.  DC Comics has the Black Lanterns (pictured top center), Marvel brings their own zombies (pictured top left) to the table, and sCrypt Comics has their Flesh and Leftovers zombies (pictured top right *art by Dan Pipito).  Below are brief summaries of the three, followed by a poll.  Please vote for your favorite, or add another in the comments section if you think they are worthy of the battle, and spread the word.  The more votes the better.

Zombies in the Marvel Universe spread like wildfire.  It seems as if there is no stopping the virus and very few have managed to stay uninfected.  While this virus is not in Marvel’s mainstream universe, the alternate one that it infects has managed to cross over into other dimensions as well.  While infected, the zombified superhero or villain retains most of their powers and personalities, but with a maddening hunger for flesh that prevents them from thinking straight.  It does appear that they are weaker however than their normal uninfected selves would be to head trauma.  First appearance was in Marvel Zombies #1 December 2005.

DC Universes are unsafe from the Black Lantern Corps.  All of the deceased heroes and villains have become black lanterns with one purpose… to bring about more death.  They feed like zombies and are constantly regenerated by their black power rings.  The undead members retain most of the powers that they had in life, and gain more power by eating the hearts of the living.  They are vulnerable to certain forms of lantern light.  First appearance was in Green Lantern vol 4 #43 September 2009

sCrypt Comics began with the world of Flesh and Leftovers.  These zombie stories all take place in the same universe, and though they were all human at one time, it would be interesting to see how other heroes and villains with powers would be able to stand in battle against them.  Whether they be rabid running zombies, undead animals, radioactive zombies, a parasite from Mars that turns you into a zombie, voodoo zombies, cannibals, or even the deformed spawns of vampires, these undead will haunt you with every page turn.  First appearance was in Flesh and Leftovers the novel.