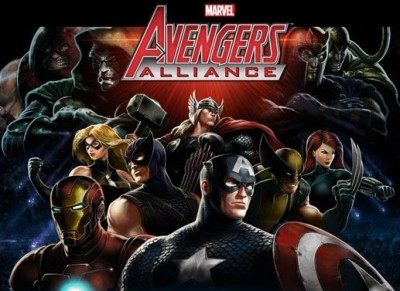 Marvel Avengers Alliance is a turn based social networking game, and while I frown upon the replayability and redundancy of most social network games, this one has caught me by surprise.  Here is the idea:  You take control of a SHIELD agent who carries out orders from Nick Fury, Tony Stark, and Maria Hill.  While trying to stop the many supervillains running around the world, you are joined by superheroes that you have to recruit along the way.

When you begin, you customize the look of your agent.  I wish this was a little more in depth, as you can’t really make a character look like yourself in detail, but you can kind of fake it.  Then you pick a class.  There are five of them that have strengths and weaknesses depending on the opponent being face, and then a sixth one called “Generalist”.  This sixth one is the one I prefer, as it is a neutral class.  You don’t have any advantages over certain opponents, but you also don’t get disadvantages either.

Each chapter contains six stories for you to complete.  If you continue to beat them and get experience in each one you will earn gold stars.  The more gold stars you earn, the better items you unlock.  Here is where it can be frustrating.  For a social network game, I really don’t want to spend a lot of time playing it.  To get these stars it could take a while, but the rewards are worth it.  There are only a certain amount of moves to do per day anyway.

If you have friends you can recruit them to help as well, and there is a player vs player option that allows you to take on others near your skill set.  The more you play, the more recruitment points you get, which will allow you to bring some of your favorite characters into the battle.  The storylines are fun, and expansions are released to keep the game going.

The best part about this game is that it is FREE.  You can’t really complain about a game’s content if you don’t pay for it.  Of course you CAN buy things with credit card purchases, but it is entirely unnecessary.  Expansions so far have included an extra chapter with a new one on the way, and 3 new recruitable heroes.  I also like the fact that there are a good bit of B list villains in the game, so you aren’t doing the same thing as any other game.

My rating….  I give it a 5 out of 10.  This isn’t an IGN 5 out of 10.  My 5 is a positive 5.  I can’t give it more than that because the game is like I said, a social networking game with limited content.  BUT what I can give it is that it is the only one that stands out from the others as far as options, moves, characters, stories, and addictability.  Yes I said it.  This game is highly addictive, so if you don’t want to get sucked in, don’t try it.  It’s fun, and will keep Marvel fanboys and girls happy.