Technology is a great asset to society, but the advancements have made life a little scary at times.  For day 16 of #scrypthalloween I decided to repost about my novel TECHNO FEAST.

Humanity has survived through countless threats, but when a super computer begins to think that the human race is flawed, survival may prove an impossibility. In order to conquer the self proclaimed “Network Entity,” differences must be put aside. Every person on earth will be put to the test. Alliances must be forged, obstacles must be eliminated, and sacrifices will be made to ensure a future for the entire planet. Forget everything you know about the past, as technology becomes our greatest enemy yet. The Network Entity’s plan to take over everything that makes life simpler is executed in various stages. While a team of disjointed specialists race to stop each digital upgrade, a sinister man lurks in the shadows with his own plans for the future.

TECHNO FEAST is available in print at lulu.com and in digital on Amazon.com

What’s your biggest fear about technology?  Make sure to use the above hashtag when responding or posting. 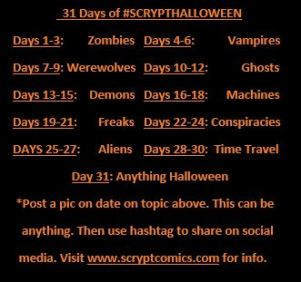 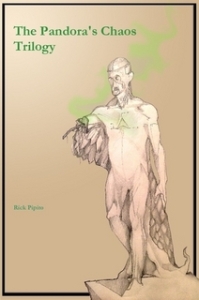 The following is a compilation of some of the most frequently asked questions I’ve received from people in reference to my PANDORA’S CHAOS TRILOGY.  I figured it was time to post them up as the next book will be ready soon.  Enjoy and feel free to ask any additional questions in the comments below.  🙂

Q: How does this trilogy stand out from the last?

Rick: Like the Star Wars saga, I tend to think of this as a starting point for newcomers to my work.  Books 4-6 are really well written in comparison to the original three because of what there was to work with.  It is a lot easier to be more creative with ghosts, demons and technology (the focuses of the novels in Pandora’s Chaos), than it is with zombies, vampires and werewolves (books 1-3 in the Eden’s order trilogy).  I wrote it in a way that anyone can jump in from this as a starting point and when it grabs their attention there would be two reactions.  If the reader enjoys what they see here, then it will not only compel them to want to see what happens in the next trilogy, but also what happened before book 4 that established this world.

Q: Are you always writing in trilogies?

Rick: I think that is the most logical approach, yes.  I’ve always loved a good series.  The problem is finding a part for people to start.  Someone might get turned off if they find out there are multiple books and they’re already 6 novels behind.  The purpose of trilogy writing is multiple… I can focus on a new antagonist throughout, and have separate threats that are secondary antagonists in each novel.  Sure you can read just any individual novel of it, but it really feels fuller with all three.  I won’t always write in trilogies, but for this it seems fair.

Q: Where will the next trilogy take us then?

Rick: Into the future.  There is a twenty five year gap between books 6 and 7 in order to introduce a mostly new cast.  The past novels have happened and there will be references, but only when necessary.  GENETIC MORSELS is going to enable me to do more creatively while building on an already existing world, and yet keeping it fresh and new.

Q: What is your take on Pandora’s Box and the whole Atlantis angle you’ve included?

Rick: Without giving too much away Atlantis has always been fascinating to me.  There is so much that we don’t know about the history of mankind and I wanted to touch on that.  I believe that every legend begins with a certain truth.  My own ideas for stories are based on realistic things that have occurred in my own lifetimes, so incorporating that with the past really gives me a lot of working room.  There had to be something opposite to the order established with the Garden of Eden in the first three novels, so when I wanted a source for chaos I immediately knew Pandora’s Box would be the thing to do just that.  My take on it is completely unique to those prior, but still keeping true to what the original idea was.

Q: With your next trilogy taking place in the near future, what will you call it?  What will it focus upon?

Rick: I have a few ideas about what to call the trilogy as a whole, but nothing definitive at the moment.  I currently have the rights to my ideas in book 7 and book 8 which will focus on the next step in human evolution and aliens respectively.

Q: Is it impossible to tie up every loose end?  There are a few characters who I wonder about their fates.

Rick: Nothing is impossible, but in order to keep new novels fresh I don’t like to include every little thing that may have gone untouched.  Take the fate of Cain.  I like to leave that open to the reader to have their own thoughts.  It isn’t necessary for me to go back to a place I’ve already been without having really good reason.  I try to eliminate the reader question of “what if?” as often as I can.  Mostly there are no loose ends.  Each trilogy ties it up fairly well.  For those things I left open, well I reserve them for the comic book spinoffs.

Q: In the Eden’s Order Trilogy there was a timeline and the graphic novel spinoff stories as bonus content.  What are the extras included in this trilogy?

Rick: As I did in EDEN, I included the novelized stories that are and will be in the comic book spinoffs, plus three new additional stories.  They are all short and are just meant to be supplemental material.  Instead of a timeline with this one, I included a “document” that drops a hint as to what the main antagonist (I won’t say who here) is trying to do in book 7.

Q: I understand that you won some awards for this trilogy.  What was that like?

Rick: I was blown away.  I received extremely positive reviews on SOULS 4 SUPPER and it took the trilogy to new heights.  It moved me from non placement on the independent author chart into the top 100… then two weeks later I had been moved into the top 25 of authors.  I’m still on an adrenaline rush and am so thankful for all of the feedback and people who made this possible through support and word of mouth.

Q: What is the symbolism behind the cover art?

Rick: When I approached my brother (Dan Pipito) to do the cover art, we discussed how we could represent all three book themes as well as the underlying plot of it all.  The look of an ancient sculpture came to mind, with modifications.  In its chest you can see what is my version of Pandora’s Box.  Emanating from that is a greenish mist that represents the souls within it.  If you look at the wings behind the statue one is feathered and one more like a dragonfly.  This is to represent the angels and demons.  Finally, the sculpture itself is very mechanical looking with seams and rivets in places, which is where the technology is represented.  It is a simple piece with many complexities hidden within (much like the mysteries revealed within the books).

Q: Where can we get PANDORA’S CHAOS TRILOGY?

Rick: The trilogy as a whole can be found in print at www.lulu.com, as well as the three novels that are included in the trilogy as separate entities.  You can download SOULS 4 SUPPER, DEVIL’S DESSERT, and TECHNO FEAST for the Kindle on www.amazon.com