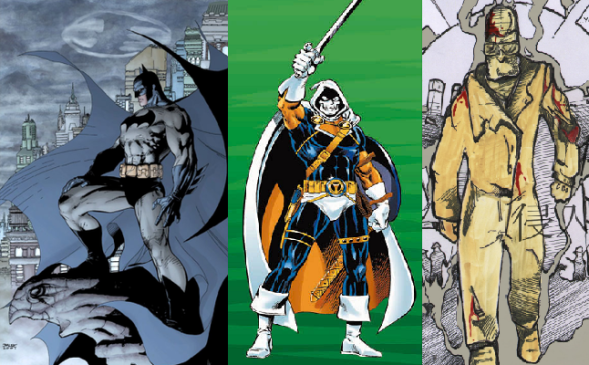 Who is the better fighter?  Who will come out on top?  Batman takes DC Comics’ corner (above left).  Taskmaster fights for Marvel Comics (Above Center).  Kristoff The Wiser takes a stand for sCrypt Comics (Above Right – artwork on Kristoff by Dan Pipito).  Like the other polls, I will do a quick summary of each character, and then you choose who you believe would win.  Please vote for one of the choices, or add your own on who you think would fit the battle well.  The more votes, the better the results.

First up is Batman.  Bruce Wayne was only a young boy when he witnessed both of his parents murders.  From that point on, he vowed to instill fear and exact revenge on those who prey on the innocent.  He traveled the world, learning many different skills and forms of combat.  As a master detective, he combines all of these skills with multiple contingency plans; in order to take down criminals around the world.  Even though he has no super powers, those who do, fear what he is capable of as well.  With the Wayne estate’s billions of dollars, he has a gadget for almost every situation.  His abilities include a genius level intellect, peak physical and mental conditioning, a photographic memory, mastery in multiple forms of combat, and an expert marksman.  Batman first appeared in Detective Comics #27 in 1939.

Next is Tony Masters (aka The Taskmaster).  His abilities were first exhibited as a young boy, while watching television.  After seeing a cowboy use his lasso, Masters was able to mimic all of the intricate rope tricks.  Since then he has primarily being a supervillain, but he has on occasion worked for S.H.I.E.L.D. and other agencies as a trainer and undercover operative.  Taskmaster is someone who is not to be taken lightly.  He has the ability to absorb knowledge instantly, mimic voices, and adapt to any fighting style by learning and replicating his opponents moves in a manner of seconds.  He also has mastered the use of weaponry and carries an extensive arsenal.  Taskmaster first appeared in Avengers #195 in 1980.

Our final combatant is often referred to as “Kristoff The Wiser.”  For over a thousand years, he has had the gift of knowledge.  Although he has the thirst of a vampire, he preys on the guilty.  A unique ability to study anything from book lessons to physical skills enables him to be a threat to any who stand in his path.  His one goal is to be able to cure himself of vampirism.  Until the day where he will find the cure, he will terrorize the criminal scum who cross his path.  Kristoff was first mentioned in “Flesh And Leftovers,” first appeared in “Blood, The Second Helping,” and his first graphic appearance was in “Blood The Second Helping: Legends Of Vampire.”

So there it is folks.  Vote for DC’s Batman, Marvel’s Taskmaster, or sCrypt’s Kristoff.  As mentioned above, feel free to add your own choice to the poll below.