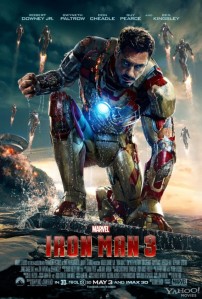 I was finally able to catch Ironman 3 last night, and this is perhaps one of the most difficult reviews for me.  Why?  You ask.  Well, It was so out of what I was used to seeing from our past Ironman/Avengers movies, that I didn’t know how to take it at first.  Is this a bad thing?  Most certainly not.  However, there are a few things with which I have issues.  Warning, there will be some spoilers in here, so if you’d like to avoid seeing them, scroll down to the last paragraph for my rating.

I must say, that the Extremis story arc was a good pick with which to go, but I wasn’t sure how they were going to do this.  I’m very glad that we weren’t seeing just another Ironman vs an armored villain.  In fact, we didn’t see much Ironman at all in this movie.  For me, that was a breath of fresh air.  To an extent.  I feel that Don Cheadle should have had more screen time as James Rhodes.  War Machine / Iron Patriot was barely present at all, and I’m still torn on the whole Iron Patriot thing.  It bothered me with comic continuity, but I accepted it.

Gwenneth Paltrow was wonderful as usual.  And although we couldn’t actually call her “Rescue” I think there was a nice homage there.  Pepper Potts kind of freaked me out a little in the end too, as I saw the whole “Dark Phoenix” thing happening, and I still wonder how she emerged from the fire with only her under garments on.  How do your clothes get burnt off (remember it is a 3000 degree celsius fire) and yet your bra and panties don’t get marred?  Hmmmm.

RDJ was once again Tony Stark.  Glad to see the emotional strain he’s gone through as well as his obsession with Ironman.  I feel that his role in this movie was most realistic of the 3 (4) movies.

I’m also glad to see that Jon Favreau was back as Happy Hogan, though for a minor role, and Stan Lee’s cameo was in my mind the worst of all his cameos, but still fun.  (Keep in mind, I don’t really think that he’s had a bad cameo, but this one was not his best).  Yinsen was also a pleasant surprise in the beginning flashback.

Other than the Mandarin, which we will get to in a second, the other comic book villain to make an appearance was Coldblood.  Eric Savin was Killian’s right hand man, and I thought he was intimidating to say the least.  Still, my comic book fan self was irritated slightly.  It was almost as if they combined Coldblood and Radioactive Man into something else.  Another thing that Ironman movies do best is Amalgamate characters.  Regardless of the lack of truth to the comic world, it did not detract from the movie, and James Badge Dale played the part well.

And now onto the more controversial roles… Ty Simpkins plays Harley, a child sidekick of sorts to Stark.  Many people have had an issue with the way Tony treats him in this movie, but I did not.  Remember, Stark is stressed, and a child with a billion questions would get on anyone’s nerves.  I think that Simpkins did an amazing job and has a promising future as an actor.  Here is my first Speculation:  I believe that Harley was just a nickname.  Since we already know that Guardians of the Galaxy will take place in the future, I’m wondering if this “Harley” is really going to end up being Starlord or Nova.  It is just too much of a setup to not be the case.

Ben Kingsley as the Mandarin…  Okay, so they say that he wasn’t the real Mandarin, and only an actor.  I’m not buying it.  I believe that he really was the Mandarin.  Why would Killian and his AIM scientists continue to call him the Master instead of Trevor if this were actually the case?  They wouldn’t.  Killian is in charge of AIM.  There is no reason for this to be.  Also, keep in mind if he were just an actor, would he really shoot someone live on TV?  Not buying it.  Speculation #2: I think it was all a twisted cover up, and that he really was the Mandarin.  Also, we know now that Avengers 2 will have a subtitle, and that Thanos is not the main villain for that movie.  Could we be looking at Avengers: Masters of Evil?  Hmmm.  Master is what they called him.  Mandarin was a master of evil.  It would be a welcome thing to see.

Now Guy Pearce as Aldrich Killian.  Pearce is by far one of my favorite actors.  He knows how to properly execute any role, and he did so again in this movie.  So was Killian really Mandarin?  I doubt it, like I said.  Aside from that, it didn’t matter.  He really was the driving force in this movie.  Sure he seemed indestructable at times, but that was part of it, and it worked well.

Finally, Ironman (Ironmen)…  The Mark 42 armor was almost useless in my mind.  I know it was just a prototype, but what did it do?  Tony remote controlled all of the suits of armor from a headpiece, so that remote capability tied in to Jarvis should have been considered the Mark 42.

All in all, the action, plot and suspense of this movie was perhaps the best of the three.  I’m still partial to Ironman 1.  I feel that the first was still the best, but I believe this came in a close second, while the second movie fell behind more.  I do recommend this breath of fresh air.  I think criticism coming from people is because they are used to what Ironman movies have offered.  Shane Black took this in an entirely different direction, and it worked.  Sometimes change is better, and in this case it was.  Ironman 3 gets 8 out of 10 stars in my book.  I think that there is a lot that has been unrevealed with my speculations, and that once some of that is explained (if at all) then this will be appreciated more.