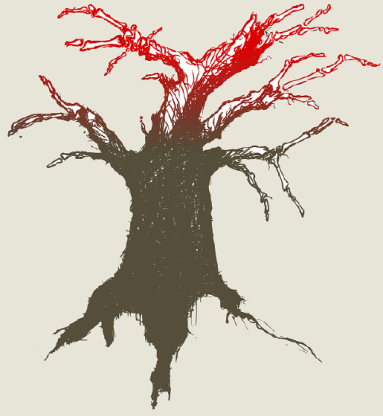 Day 21 of #scrypthalloween shows the cover of my EDEN’S ORDER TRILOGY sans text. @dpipito did the art which depicts a tree that represents the tree of Knowledge in the Garden of Eden, but has hints of skin, blood, and bones to signify each novel within. This collection consists of the novels: FLESH AND LEFTOVERS, BLOOD THE SECOND HELPING, and BONES AT BREAKFAST. It also contains the spinoff short stories: ZOMBIE INCIDENTS, LEGENDS OF VAMPIRE, and IN CASE OF WEREWOLF, as well as a timeline of events.

It is available in print at lulu.com and Barnes and Noble sites, as well as in digital at Amazon…

Official description: In FLESH AND LEFTOVERS Gordon Lightcap and Moira Donatelli recruit survivors of #zombie incidents in preparation for something much more sinister.
BLOOD, THE SECOND HELPING takes the two on separate paths. Gordon seeks answers, assisted by an old flame. As they scour the globe in search of #vampire legends, Moira has aligned herself with Cain, but her goals are in question. BONES AT BREAKFAST places Gordon and Moira reluctantly working for the Russian military. Cases of #werewolf activity become obstacles in stopping Cain from finding the Garden of Eden.

Day 9: The Story Behind the Art

While the stories to the books written by Rick Pipito are the main content, a good cover to the book is what catches the eye.  Let’s take a few moments to talk about the ideas behind each cover and the art that Dan Pipito brought to life.

FLESH AND LEFTOVERS has a cover that come into mind over the phone.  I pitched my idea for the first book to Dan and he immediately said, “Zombies?  Okay, I’ve got it.  The cover is a set of teeth tearing into a raw hunk of meat.”  He felt that it matched the title of horror and food amalgamation.

For the spinoff comic ZOMBIE INCIDENTS, the concept was mine.  I had access to various fake body parts that looked and felt real.  In my mind I thought, “What would Hannibal Lecter keep in his fridge?”  We set up my spare refrigerator with a bowl of bloody leftovers, through in the fake body parts and snapped a picture.  Then Dan put the whole thing through a celophane like filter to give it that artistic touch (after all, leftovers ARE often found wrapped in plastic).

BLOOD, THE SECOND HELPING’s vampire theme is evident in the cover.  Dan incorporated a lot of the story elements from the book.  The city bathed in blood is symbolic, while the shadowy outline of the antagonist’s face is seen behind the large fangs.  A pivotal scene from the book is also shown with a reconstructed body rising from the fountain of youth.  It’s a very busy (in a great way) cover that keeps with the theme of the teeth from F&L.

LEGENDS OF VAMPIRE, the BTSH spinoff comic, was another of my ideas.  Wanting to keep the real photograph idea of the first comic, this time we had a friend pose for us holding a glass of wine.  The closeup shot of her neck with the wine (which is good for your blood of course) was put through an antique filter to give it an oil painting appearance.  Dan added the fang marks and highlighted veins to be more pronounced to give it the “I’ve just been bitten by a vampire” paleness.

BONES AT BREAKFAST is the last in the first trilogy, so it made sense to close it out with a similar theme of teeth.  This time Dan had the full snout of a wolf prominent in the foreground.  You can notice that the jaw is not as pronounced as a normal wolf, giving it that human likeness of a werewolf in front of a very full moon.

The comic spinoff, IN CASE OF WEREWOLF, was another photograph idea.  I gave Dan the concept and he took some bones from a medical office skeleton, threw them on a plate with some prop hair, and added a cup of coffee and orange juice to symbolize the bones at breakfast aspect.  Again, he passed the photo through a filter before adding text and finalizing the cover.

THE EDEN’S ORDER TRILOGY cover is a simple tree.  This is no ordinary tree.  Upon second glance, you can see that the bark of the tree is stretched skin like in texture, the branches are in fact shaped like bones, and the red tips where the buds would be is blood.  This is to show not just the tree of life from the Garden of Eden (a place we visit in the novels), but also to represent the flesh, blood, and bones from the titles of the included books.

SOULS 4 SUPPER marks the start of a new themed trilogy.  Dan went simpler this time.  I told him about what my version of Pandora’s Box would look like and that is what we decided for the cover.  He added intricate gear and piston layouts, and I told him I wanted souls to be wisping from the top of it like they were escaping.  His decision for the textured background and very little color is perfect for focusing on the object depicted.

The comic spinoff, GHOSTLY HAUNTINGS, came as an easier venture.  Dan worked in a kitchen at the time, so when I said I had this idea to have ghosts escaping from a pot of stew, he grabbed the biggest deepest pot he could and took a picture of the steaming contents.  Then he added ghostly faces into the stew and steam.  The even better part of this is that the faces are actually warped and altered photos of famous people and pieces of art.  They are altered to the point beyond recognition, but if you look closely, you may just see something you recognize.

DEVIL’S DESSERT has an intriguing cover.  The Crown of Thorns, the Spear of Destiny, and the Sword of Eden are all artifacts crucial to the book’s storyline.  Those are the items represented in the two tone cover, with a little bit of orangy-yellow fire coming from the blade.

TECHNO FEAST’s cover was another mutual idea.  The main threat of this book operates from a satellite.  This satellite depicted isn’t necessarily THE antagonist, but it makes sense once you read the novel.  Outerspace in the background with the purplish gasses displayed among the deep blue make it a contrast that is eye captivating.

PANDORA’S CHAOS TRILOGY is another combination idea.  The Statue is a way of representing the ancient history involved in the story (think roman architecture).  It’s one arm has a broken limb.  You can see feathers of what is an angel wing, while a dragonfly like demon wing droops to the other side.  It’s face is very mechanical looking, while his heart is Pandora’s Box yet again, but with ghostly energy emanating from it.  Souls, Demons and angels, & technology (the focus of these 3 books) are represented evenly.

NO, IT’S NOT.  YES, IT IS: ARGUMENTS is the only book by me (Rick Pipito) that does not have a cover done by Dan.  The idea here was to represent the turmoil of arguing that the non-fiction book’s topic is about.  I had wanted to represent the two sides to one’s own psyche.  There is a wavering of opinions that often are quite contrasting without facts.  So, I had my wife take a picture of me facing one way with my glasses on and a different hairstyle.  Then I removed my glasses, and took another shot of me with some facial scruff.  By putting the two of them together and filtering them to look like a blueprint of arguments, it seems as if my two selves are in a dispute with each other.  It not only symbolizes some of the times that I’ve struggled to decide what is right or wrong, but also gave me the experience of making my own cover for what will eventually be a trilogy of non-fiction.

In addition to these amazing covers, there is also the few pieces of internal art that work with the stories when they are needed, and then there is of course the comic books which have multiple artists representing the plots.  All of the above book covers can be seen in closer view through the novels and comics sections of this site.  They are also available through purchase links on the right side of this page.