One of my favorite comic book characters when I was growing up was an anti-hero.  He was a good guy, who did bad things, so that the guilty could be punished.  Sure, most of us are familiar with Clint Eastwood’s Dirty Harry movies or Liam Neeson in Taken.  These are characters who push the boundaries, cross the line, and serve justice the way the judicial system won’t.  Though I’d love to have the two mentioned above in this poll, this is a comic book battle, but don’t worry, there are plenty of contestants: The Punisher (Marvel Comics), The Red Hood (DC Comics), Judge Dredd (2000 AD Comics), Eric “The Crow” Draven (Image Comics), Sin City’s Hartigan (Darkhorse Comics), Jack Bauer (IDW Publishing), and of course my favorite of them all… Johnny Chong (sCrypt Comics).

Who do you think is the most likely to win this battle royale?  Place your vote below or add your own to the poll.  Need help deciding?  Here’s a breakdown of each character:

For Marvel Comics:  Frank Castle (Castiglione) was a veteran family man, but when his wife and child were murdered by the mob, he took his 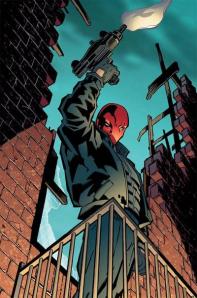 combat and field expertise into a new battle… “The War On Crime.”  Since then, he has moved from city to city, vowing to bring justice to those who are unjust, in an eye for an eye manner.  Those who are responsible for deaths of others will be found and killed by The Punisher’s hand.  He is highly skilled in hand to hand and weapon combat, is an expert marksman and military tactician, Has an exceptionally high pain tolerance, and is in peak physical condition.  He has also held his own in toe to toe battles with a few superpowered individuals.  The Punisher first appeared in The Amazing Spiderman #129 (in 1974).

DC Comics: Jason Todd took over the mantle of Robin once Dick Grayson became Nightwing.  After the Joker killed this new Robin, Todd emerged years later.  Angry that vengeance hadn’t been sought out against the Joker for killing him, Todd began travelling the world as Bruce Wayne had.  He trained in many forms of martial arts, and came back under the persona of The Red Hood.  The difference between him and Batman is one thing… He uses guns and kills those whom he feels are no longer worthy of life because of their guilty acts.  The Red Hood has fought not only Batman and many of his rogues, but gone up against the odds and come out victorious.  Jason Todd first appeared in 1983, but didn’t become the Red Hood until 2005 in Batman #635.

2000 AD Comics: Judge Joseph Dredd comes from a future, where crime is rampant.  There are no longer

police, judges or juries.  Instead, a group called Judges, consist of the law enforcement and serve the purpose of judge, jury and executioners.  Joseph Dredd is the most well known of all the judges because of his effectiveness and decision making.  Armed with a daystick, his Lawgiver pistol, and a large lawmaster motorbike, criminals should cower in fear and hide if he is coming their way.  He is an excellent marksman, has bionic eyes that give him perfect nightvision, and is an expert in unarmed combat.  Judge Dredd first appeared in 1977 in 2000 A.D. #2

Image Comics: Eric Draven and his fiance were murdered unjustly alongside a highway.  A supernatural spirit known as the Crow ressurrected him because of his unjust murder and has vowed him to find those killers and wrongdoers, and show them true justice.  He has enhanced catlike reflexes with superstrength and agility, a healing factor, resistance to pain or injury, and can see through the spiritual eyes of the crow.  The Crow first appeared in Caliber Presents #1 in 1989.

Darkhorse Comics: Detective John Hartigan is a sixty something year old veteran officer in Basin city.  He is able of withstanding immense amounts of pain before collapsing, including bullet wounds, and cares little for himself as he protects the innocent.  Hartigan tends to let murderers and harsh criminals suffer a lot of pain before dying.  John Hartigan first appeared in That Yellow Bastard in 1996.

IDW Publishing: Jack Bauer has worked as a government official for CTU (Counter Terrorist Unit).  Often known to break the rules and push way beyond the boundaries of what is acceptable, he will do whatever it takes to take down the bad guys.  His interrogation techniques are effective, but considered heinous by some, as he will stop at nothing to get the truth.  Terrorists and criminals intent on destroying the United States or harming the innocent, do not want to be in his path.  He is highly trained with firearms and hand to hand combat, and has an unusually high pain tollerance.  Jack Bauer first appeared in the show 24, in 2001, and since then has been brought to comic book form by IDW.

sCrypt Comics: Johnny Chong was the owner of a gunshop in Jim Thorpe, PA until a virus killed most of the residents of the town.  After taking on hundreds of zombies, vampires, and even coming face to face with werewolves, he

decided to travel to China.  There, he trained under the Shaolin Monks to be able to use his body and mind as a weapon, in addition to his vast knowledge of firearms.  Having watched the woman he once loved murdered by a few thugs, he vowed to never let anyone he loved die by those likes again.  Johnny Chong although not yet in comic book form, is a prominent character in the sCrypt Comics universe.  He first appeared in “Flesh And Leftovers” the novel in 2010.

So, there’s the info, folks.  Vote below for your choice in who would win in an epic battle royale.  If you think there is someone else that should be added to this fight, feel free to comment and 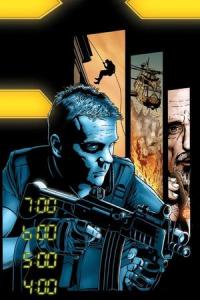 vote for “other”.  Spread the word, and remember, the more votes, the better.

-Thanks again for the participation (sCrypt Comics)

Commanders And Their Agencies Poll Winner(s)?!?

Well here is a first.  It appears that people are divided on the outcome of this battle.  Nick Fury and S.H.I.E.L.D (Marvel Comics), Amanda Waller and Checkmate (DC Comics), and Liz Powers and M.U.T.S. (sCrypt Comics) were duking it out when a fan decided to add General Hawk and G.I. Joe (IDW Publishing).  Multiple votes came in for all four, but in the end each ended up with 25% of the vote.  All four agencies and their commanders must have realized that humanity is here to stay, and so they put their differences aside and became one large organization.  With all of their efforts combined, there is no longer a need for superheroes to protect the planet.

Thanks for voting.  The poll will remain open to see how it continues to play out.  Stay tuned for our next comic book battle poll coming soon!