Interview about THE THIRST OF CAIN 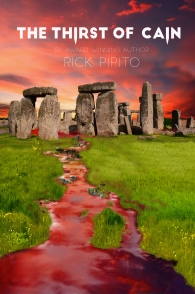 With every new release I get a handful of questions from readers and during promotions.  Here’s some of the ones I’ve gathered so far for “THE THIRST OF CAIN”.  Feel free to ask any that you have in the comments below or send me a message.

Q: Tell me about your new novel.

Rick: Francis Murphy wakes from a night’s sleep to discover a horror. His blood-stained hands reveal his darkest fears. With each passing minute the submerged half of his personality comes one step closer to total control. Realizing he has only days to find a cure, he must search throughout history to discover the origins of his curse. From the beginning of humanity to modern times, the mark of Cain has influenced many. What is that mark? How far will one man go in order to piece together clues to the puzzle? At what lengths will he go to save himself, and at what cost?

Q: Cain was a primary character in your earlier novels. What made you bring him back?

Rick: Reader feedback was my ultimate driving force. So many people loved the character and he slowly faded into the background as my novels progressed. I felt it was time to bring him back to the heart of the story, and see the side of him that the novels prior to this didn’t fully address.

Q: Does this go against your “I’m not going to write the same type of novel twice,” or do you feel it is a different approach?

Rick: This is a much different approach. It’s true I didn’t want to do another book involving vampires, or time travel. Both of those things sort of take a back seat in this even though they are there. It’s less a book about either of those, and more a book about discovering history in reverse. Cain is in his prime in this novel, so he’s more villain than before… he just happens to be a vampire. Murphy’s journey through time is more about solving the mystery of where his curse came from than the sci-fi element. He just uses time travel to trace the lineage back. So, this is a much different novel than BLOOD, THE SECOND HELPING or A COURSE FOR HUMANITY.

Q: There are a lot of historical refences and tie ins in this book. How much research did you have to do?

Rick: When it came to overall research it wasn’t too extensive, but I wanted each time period in the story to have actual historical significance. I didn’t really know when specifically each chapter would take place until I found some dates with events that would fit the narrative. Finding those pieces of information did consume a few weeks of my time in order to get the story right. The research actually had me rewrite my outline four or five times to better fit where I wanted the book to go.

Q: You and your family were recently featured as a cover story in your local newspaper. How does that feel and factor into what you do?

Rick: It was really a moment that made me so proud. To be called, “the Dynamic Duo” was a surprise. People have said that we are a power couple and inspiration for those who want to prove that hard work will help you reach your dreams. I’ve always been flattered by that. The interview was a lot of fun, but I didn’t expect us to be the cover story. Needless to say we framed the article and have it hanging in my office. Things like that just make me want to go above and beyond my goals even more, and it helps me to push myself harder to attain those goals.

Q: How long did it take you to write THE THIRST OF CAIN?

Rick: The concept has been in my mind for about eight years. Every few months I’d come up with ideas of where to take it, but it was shelved for my other works. Once I finally started to sit down and write it, it took about eight months from outline to draft, then to edits and final copy.

Q: Do you have a team of early reviewers? If so how did they respond to the new book?

Rick:  I had 20 beta readers for this book. Of those, a dozen gave their feedback which I value immensely. The response was all very positive with one reader claiming that they wanted another few pages in the epilogue to explain what happens next. To those readers I just have to say, it will be worth the wait to find out, but the hints are there.

Q: You do a decent job of writing each novel as a standalone, but also tying into the whole series. How hard is it to do this and keep the continuity?

Rick: It becomes tedious at times. I have to explain some things in back story, which makes me go back and reread previous plot points over and over to preserve continuity. I really like the idea of having a series that gets better with each installment since the beginning, but can also be a starting point for any new reader to my works. The balance is sometimes tricky, but not an overall difficult task.

Q: I’ve read the book, and have one question… That ending was totally unexpected. What? How? Where is this going?

Rick: You’ll find out in the next novel CONSUMED BY WAR. The reset button has technically been hit, so where THE THIRST OF CAIN finds the character going backwards in time to different periods, the next installment will be the opposite, except without the time travel element. There won’t be any more vampires, just two immortal beings “The Destroyer” and “The Redeemer.” There will also be a short story spinoff that will reference the events in THIRST called THE LOST DAY, which will also come out later this year.

Q: Tell us about the cover idea. Who did the art and design?

Rick: My brother Dan, did the art and design for it. My concept was to have Stonehenge as the center of the cover. It plays a significant role in the plot as far as what its true purpose was. Having a river of blood coming from it was an idea I pitched to my brother, and he immediately went to work with a few pictures in photo editing software. When I received his final copy for approval I was blown away. I think it’s my favorite cover to date.

Q: Where can one purchase a copy of THE THIRST OF CAIN?

The Thirst Of Cain 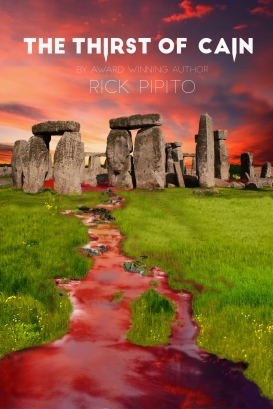 Francis Murphy wakes from a night’s sleep to discover a horror. His blood stained hands reveal his darkest fears. With each passing minute the submerged half of his personality comes one step closer to total control. Realizing he has only days to find a cure, he must search throughout history to discover the origins of his curse. From the beginning of humanity to modern times, the mark of Cain has influenced many. What is that mark? How far will one man go in order to piece together clues to the puzzle? At what lengths will he go to save himself, and at what cost? From the award winning author of BLOOD, THE SECOND HELPING and A COURSE FOR HUMANITY comes THE THIRST OF CAIN. This heart pounding adventure unlocks the secrets of Stonehenge and more.

Novel is available for $7.99 in print at http://www.lulu.com/shop/rick-pipito/the-thirst-of-cain/paperback/product-23645538.html

Trailer – The Thirst of Cain

My novel THE THIRST OF CAIN has arrived.  Here’s a trailer to go along with it.  Book is available at lulu.com in print and on amazon in digital.