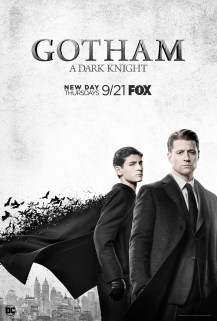 Unlike the other DC TV shows that I reviewed a few days ago, Gotham has potential.  Sure, it’s been eye rolling and frustrating to comic book fans at times, but season 4 makes up for a lot of that.  Warning that there are some spoilers ahead.

This season did a great job of really delving into some of the lore that makes Batman who he is.  Although there were some episodes that dragged (Barbara getting the Demon’s Head was a horrible plot point), most of them kept me wanting to watch more.

By the season’s end we get to see who will actually become the Joker.  He isn’t the Joker yet, but this take on him really shows him as the Red Hood without wearing the hood.  We’ve got multiple cliffhangers.  Butch will surely become Solomon Grundy again, Penguin will have his empire back, Riddler and Lee will be in debted to Hugo Strange and Penguin, Selina will undoubtedly have survived and used up one of her nine lives, Gotham is looking to be “No Man’s Land” straight from the comics, villains like Firefly and Mr. Freeze are on the loose and ready to make their marks, Bruce Wayne and Gordon standing on the rooftop near the spotlight is a bit of a foreshadowing, and everything is set up for a good conclusion to the prequel show.  The next season is said to be the final one with Bruce finally becoming Batman, probably resulting in Jeremiah becoming the Joker, and so much more anticipated comic book accurate points.  At least that’s what we can hope for.

For Season 4 of Gotham, I have to give it a high score of 4 out of 5 sCrypt ratings.  Perhaps it’s because the CW has left such a bad watching experience that I’m willing to accept what Gotham has given us, but I think that the writers of this show really care about what they are working with, at least to some degree.  What did you think of this season?  Do you agree or disagree?  Comment below and share your thoughts.