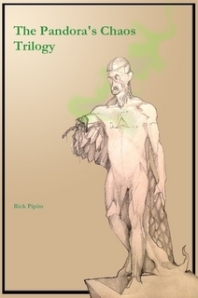 THE PANDORA’S CHAOS TRILOGY contains the previously mentioned three novels in my 31 Days of Halloween: SOULS 4 SUPPER, DEVIL’S DESSERT, and TECHNO FEAST.  It also has the added bonus of the novelized stories that are contained in the graphic novel spinoffs: GHOSTLY HAUNTINGS, DEMONIC ENTITIES, and FINAL UPGRADE.

To counter the order from the first trilogy, these three separate installments focus on the results of opening the fabled Pandora’s Box.  It is a complete counterbalance to the results of the first set, and now there is a new series of events culminating from that.  With order there must be chaos, but what is “chaos” really?

I wanted something different for the portrayal of the container.  Research about the story of Pandora and different takes on it was a lot of fun for something that was just an underlying theme.  Creating the characters of Gilgamesh and Pandora’s other associates at the time of the box’s creation felt right.  Perhaps this box existed.  Every legend has some roots in truth, so Atlantis seemed like an appropriate place to hide the Temple of Pandora.

The architects designed the box and the temple to prevent anyone from accessing what is inside.  Is it truly chaos?  Well that depends on the point of view of the individual.  A little hint.  It safely contains a rip in the very fabric of space that is a gateway to the afterlife.  Imagine the entities that could emerge from such a hole or a full bodied person leaping into it.  It’s pure terror.

Aside from the aqueduct, maze, and puzzle solving that would go into unlocking the box, Pandora’s box is unique in design (and for reason that you can find out in the first of these three books SOULS 4 SUPPER).  It is shaped like a pyramid that unfolds through a series of gears and intricate mechanical pistons.  (Special note: the gear design was actually an add on by my brother, Dan.  When he did the artwork I mentioned what it would look like in the book, and he added to it, so it made the description even better).

The events in this trilogy all stem from the quest to find the box and from opening it.  Check out PANDORA’S CHAOS TRILOGY in paperback at Amazon, Lulu or Barnes and Noble.  The digital download of the novels and extras are also available on Amazon

At the end of every year, the media plays a montage of famous people who have died that year.  I decided to put together a little list of characters in comics that died this year.  Of course, with comic books, characters often never stay dead, but they still deserve mention.  Unless of course it is sCrypt Comics, because whoever we kill STAYS Dead… 🙂  Here is the list.  If you have any others that you can think of, please list them below.  (information aqcuired through wikipedia)

Daken was killed by his father, Wolverine, in Uncanny X-Force #34

Hybrid was shot by Eddie Brock in Venom vol 2 #15

Mandarin was killed by Zeke Stane in Invincible Ironman #526

Megatak was killed by Toxin in Venom vol 2 #21

In the sCrypt Comics Universe (includes the novels):

Fox, Liz Powers, & Snake were all killed by terrorists in Souls 4 Supper the novel

The Lycan Queen was killed in an alternate future story called “What If…” in Bones At Breakfast: In Case Of Werewolf

Hector Alvarez died of starvation in the short story “Salty Dog” in Bones At Breakfast: In Case Of Werewolf

Pandora, Gilgamesh, Simeon and Miriam had their souls devoured by Cain in Souls 4 Supper the novel