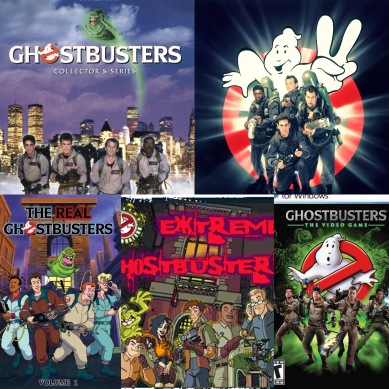 I could just put a whole bunch of other scary stories in here, but the ghost stories that stuck with me the most over the years were those from the Ghostbusters franchise.  In my novel SOULS 4 SUPPER, and its spinoff GHOSTLY HAUNTINGS, the first names of some of the characters pay tribute to the actors and cast of the original films.

The first ghost movie I ever watched was the original Ghostbusters.  I was instantly a fan.  The follow up, Ghostbusters 2, may not get the credit it deserves but it is still a great movie in my opinion.  Again, I was a kid, so when The Real Ghostbusters cartoon came out I was all for it.  I’m pretty sure I caught every episode and even liked the less detailed animation that followed (The Extreme Ghostbusters).

My hopes for a third feature film in the franchise died out, but then we got Ghostbusters the Video Game.  This brought together the original writers and actors in a storyline that basically was the third movie.

Now before you get all bent out of shape about me not including the new Ghostbusters movie in there, I’ll explain.  First off, I haven’t seen it yet.  I know.  I know.  I plan on it, but am not a fan of remakes that disregard the originals.  In my opinion the new one should have been a loose sequel.  It would have made more sense and made fans happy.  I will see it eventually though.

The other reason for not including it is because I’m talking about the inspiration I had with ghosts.  There are countless movies I’ve seen that freaked me out and they all made their mark, but they were all a one and done watch.  I can still watch GB over and over again and not get sick of it.  I wrote Souls and Ghostly before the new movie came out, so it can’t count as inspiration.

Regardless, if you like a good spooky book, check mine out.  Souls got me a place in the top 25 and 100 lists of authors, and I even freaked myself out at times writing it.  What are your favorite ghost stories?  Make sure to use the hashtag #scrypthalloween if you post, and you’ll have a chance to win one of my books!