I previously released plot summaries on this blog for my zombie and vampire stories, so now here come the lycans.  How does one become a werewolf?  Does a werewolf have control over their actions?  The list of questions goes on and on.  Werewolf lore has been quite different over the years, and with my third novel and third sCrypt comics comic book, I’ve included these differing accounts, plus my own.  As the plot continues, this time, our characters are confronted with a werewolf threat.

The following are each of the short stories in my novel “Bones At Breakfast,” plus the spinoff graphic novel, “Bones At Breakfast: In Case Of Werewolf.”  Both of these can be purchased at the links on my sidebar.  Find out how all of them tie together into one plot, by grabbing your copy today!  Stay tuned for my ghost story breakdown as well.

Bones At Breakfast: (The novel) Gordon Lightcap and his team are caught in an uneasy alliance.  By working alongside Russian General, Alexander Putski, they hope to stop the forces that Cain left in his wake.  Unbeknownst to them however, is the fact that Cain is still alive.  In his new form, he is an even greater threat than before, and one step closer to his goal.

Bones At Breakast: In Case Of Werewolf: (Graphic novel spinoff) Do your bones ache? Does your instinct sometimes prevail over rational thought? When night descends, do you feel “different”?  If any of these are your symptoms, then you are not alone.  You may have contracted lycanthropy, and when the moon rises, your inner beast will emerge.

Fairy Tale Wolf: Discover the real story that inspired such fairy tales as “The Three Little Pigs,” “Little Red Riding Hood,” and “Peter and The Wolf.”  Join Alison Ridings as she tries to solve a series of grisly murders that puts her family on the wanted list. (Bones At Breakfast)

Man, Monsters & Myths: Long before the Greeks believed in their mythological lore, the gods whom they worshiped were actually humans.  Herakles must journey to a dark land to gain his father, Zeus’ honor.  The dark land is owned by his brother, Hades, and his three half human and half wolf sons.  His sons are known as Cerberus one, two and three. (Bones At Breakfast)

Vicious Cycles: When a teenager checks in to a mental institution the staff believes his is truly mentally unstable.  Each phase of the moon has a different effect on the teen, but when he encounters a rare phase phenomenon, he becomes the most powerful werewolf yet. (Bones At Breakfast)

Manada De Lobos: This is a newspaper clipping like story that tells about a Latin gang.  This gang is amazed at how wolves are great survivors, and mimic many of those animalistic instincts. (Bones At Breakfast)

Curse Of The Gypsy: In April of 1719 A.D., Jonas Ford and his neighbor confront a band of gypsies for stealing from them.  One of the gypsies places a curse on Jonas, who now becomes a werewolf under the light of a full moon.  Once he finally realizes the horrible acts of murder he has done during his lycan state, Jonas begins to worry. (Bones At Breakfast)

Role Reversal: The year is 1958, and there have been many sightings of what people call a Sasquatch.  What they assume this creature is, and what it actually is are two different things.  This is a documentary style story that tells the tale of a wolf who grows to become more manlike with each year of his life. (Bones At Breakfast)

Foresight: In an alternate future, Madame Callisto has taken on the role of lycan queen.  After absorbing her former master, Cain’s traits, she controls her lycan army to become the dominant species on the planet.  These lycans are large, warg like wolves.  The humans aren’t as easy to defeat as she thinks.  As Chastity Smith brings Gordon Lightcap out of his sorrows, they team with a rebellion of wolf men and humans to stop the lycan army. (Bones At Breakfast)

Trail To Guidance: Chief Whispering Wolf guides his grandson with a tale of how he discovered his inner spirit guide.  Throughout history, their Native American Indian lineage has been tied with wolf spirits, that grant them special abilities. (Bones At Breakfast)

The Hunt Ensues: Picking up after the events of the “Confrontation” story, the Military Underground Tactical Specialists are on the hunt.  Their targets are two Russian soldiers who are now werewolves.  To help them on their mission is their newest recruit, code named Chameleon, but will the civilians that stand in their way prove to be more of a threat than the werewolves themselves? (Bones At Breakfast)

Eden: Gordon Lightcap, Johnny Chong, and Chastity smith face off in one final battle against Madame Callisto.  Time is against them as the frigid arctic air surrounds them.  Meanwhile, Moira Donatelli confronts her former lover, Cain.  Can she convince him to stop his mad scheme or will he detonate a nuclear weapon that will forever change the face of the planet by revealing the long lost Garden of Eden? (Bones At Breakfast)

Annabelle And The Prince: The fairy tale “Beauty And The Beast” had its flaws.  Here is the real story of how it all went down. (BAB: In Case Of Werewolf)

Son OF A Bitch: Loki, jealous of his brothers’ reputations with their father, creates an arcane son.  His son has the DNA of a human and a wolf.  His name is Fenrir, and his appetite is ever growing.  This is where Norse Mythology grew its roots. (BAB: In Case Of Werewolf)

Lunar Loon: The teenager from the “Vicious Cycles” case is now a middle aged man.  He has studied all of his life and become one of NASA’s top astronauts.  Finally, trying to discover why the moon has so much influence over his werewolf form, he travels there.  Did you ever wonder what would happen to a werewolf if it were on the moon itself?  Then you don’t want to miss this. (BAB: In Case Of Werewolf)

Salty Dog: A member of a Latin gang has been released on parole, but he uses the opportunity to escape his watchers.  Stealing a plane and then crash landing on an island, he must use his knowledge of how a wolf would survive, and apply it to himself. (BAB: In Case Of Werewolf) 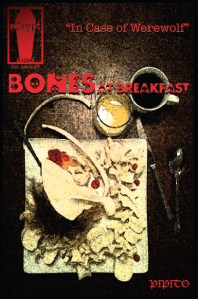 War Wolf: During the American Revolutionary War, there was a battle called the “Moonlight Battle.”  That was the night that an elderly Jonas Ford, from the “Curse Of The Gypsy” case, turned the tides of the battle at sea. (BAB: In Case Of Werewolf)

Abominable: This is the long lost journal of Charles Howard Bury and his search for the Yeti.  What he finds may not be what the legends describe. (BAB: In Case Of Werewolf)

What If?: In the alternate future where a lycan Queen rules the land, the leader of the human resistance confronts her for one violent final showdown. (BAB: In Case Of Werewolf)

Path Of Guidance: A Native American boy has learned to utilize his inner spirit guide, the wolf.  He uses his enhanced abilities to chase the trespassers who would threaten the wildlife of his land. (BAB: In Case Of Werewolf)

Marrow Minded: One of the Russian soldiers being hunted in “The Hunt Ensues” case, acts as a predator in the subway beneath Moscow. (BAB: In Case Of Werewolf)

The Hand Of Eden: When the Garden of Eden is discovered, its healing touch cures all disease on the planet, including that of lycanthropy. (BAB: In Case Of Werewolf)

The Doctor Who Hides: All his life Nigel Beckham has had dreams.  In these dreams, he is his brother George, who died at birth.  By use of various medicines, he induces a long sleep to see if he can discover this alter ego of his.  Unfortunately for him, his alter ego becomes more prominent, and this darker half dominates his nightmares.  This is the story that loosely inspired “The Strange Case Of Doctor Jekyll And Mister Hyde”. (Flesh And Leftovers: Eden’s Order Trilogy)