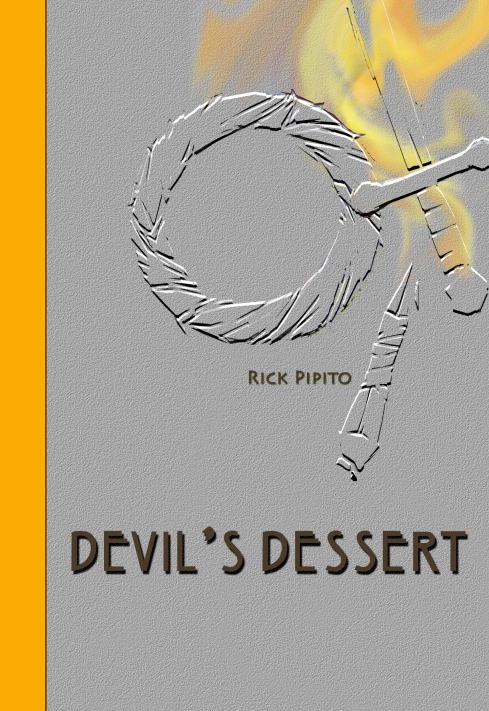 Day 9 of #scrypthalloween is about my novel DEVIL’S DESSERT. The cover by @dpipito depicts an engraved look for three artifacts central to the plot: The Spear of Destiny, The Crown Of Thorns, and The Sword Of Eden. The research I put into writing this included All major religions and some mythology. It was my goal to show that despite our different views, the human race can be united with what we have in common. The similarities through the major texts are astonishing…..

official description: Pandora’s Box has been opened. Now humanity must face its darkest battle yet. The archangels of virtue and the demons of sin have come choose earthly hosts. It is a race against time for the legions of Heaven as they try to find the Sword of Eden. At the same time, the denizens of Hell attempt to locate the Spear of Destiny. These two artifacts could decide the war’s true victor.  While these gods fight for their own agendas, Gordon Lightcap must send his team of elite specialists to find what he believes will be the only thing that can save the human race.

The decisions made by humans will be crucial to the forces of Light and Darkness. Will the residents of Earth be virtuous, or will they give in to the seven deadly sins? #novel available in print and digital at lulu.com, Amazon, and Barnes and Noble as part of the Pandora’s Chaos trilogy. 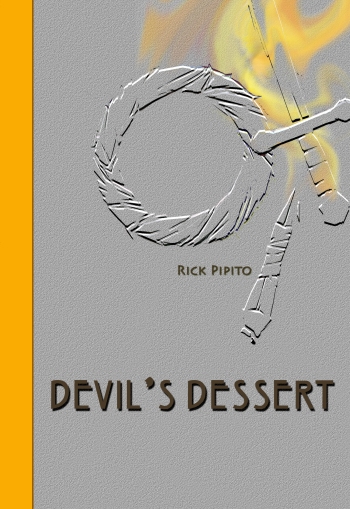 What can be more frightening than demons?  For this installment in #scrypthalloween I decided to focus on my novel DEVIL’S DESSERT.

The cover done by Dan Pipito depicts three artifacts crucial to the novel’s plot.  The Crown of Thorns, The Sword of Eden, and the Spear of Destiny.  When the ancient battle between Heaven and Hell comes to Earth, humanity is disposable at best.  The forces of Light and Darkness prepare for their final battle here, but for humanity to survive they must open their eyes to the truth.

Individual religions must sift through the teachings that are wrong, and find a common ground in all faiths.  Only then will the people of Earth know what it will take to survive this godly war, and drive the demons back to their own realms.

While all of this is happening one lost soul will journey into the depths of the afterlife to exact his own revenge.

This was one of my favorite novels to write, and took countless hours of research to do so.  If you like Dan Brown’s novels, then I highly recommend this one.  It’s got the mystery and history with lots of action and a frightening look at reality.

What are some of your favorite demon or angel stories?  Make sure to #scrypthalloween if you post on it, and you may win a free copy of the book! 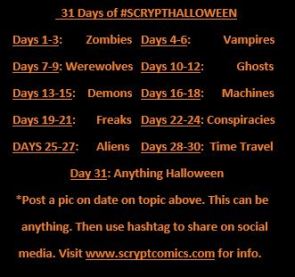 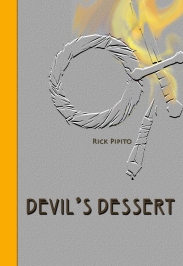 31 Days of Halloween continues, and here’s a post about my 5th novel, DEVIL’S DESSERT.  Different religions have different depictions of God, the Devil and the countless angels and demons.  Trying to take them all into account can be a tedious task, but it was well worth it in the end.  So just how does a book about demons respect each faith?

In truth, it probably doesn’t.  It’s too controversial of a topic to delve deep into it, but I can say I tried to make them all the “real” faith.  Though I was raised Catholic, I’ve learned to respect everyone’s beliefs or disbelief.  Luckily for me, there is a lot of common ground with which to work here.

This book’s version of “God” and the “Devil” are unique.  Instead of calling them those nouns, I described them as the yin and yang of sorts.  It is about the eternal war between light and darkness (good and evil).  After reading DEVIL’S DESSERT you could come to the conclusion that these entities are not the true God and devil or that they are.  It is up to the reader to decide at this point.

Lux Lucis was the name I gave to the embodiment of Light (God).  The name is derived from Latin meaning “The One Light”.  Tehum, on the other hand, means Darkness, and is the name I gave the dark entity (the Devil).  Their goals differ from one another, so they aren’t necessarily good or evil because they must co-exist in order for the universe to continue forward.  It would be oblivion without the other, yet only the Light seems to know this.

From Light was created darkness, and from them the angels and demons.  For the main angels I took common archangel type characters (Michael, Raphael, Metatron, etc) and had them each as representatives for a heavenly virtue.  The same goes for the demons representing vices, only with the demons, common names for the devil were used.  In other words, I chose to use the name Satan as the demon of wrath, while Lucifer is an entirely different darkness, both of which are separate from the actual “devil”.

There are other minor angels and demons on each side, but those are not the focus of the story.  The war between heaven and hell finally has a grand battle on earth with humanity stuck in between, searching for a way to remain a separate side.  While some have chosen a side, our main characters have preservation of the human race in mind.  In other words, they are saying “Take your war somewhere else.”

When it came to my depiction of Hell, I relied heavily on Dante’s Inferno for ideas.  I always loved the painting and felt that it was as true a representation as could be.  I took those ideas and tied them in with the descriptions of hell from the Bible, the Torah, the Koran, and others texts.  Then I created the place with my own additional thoughts.  We see a moment where Cain is seeking revenge and wants to kill “God”.  In order to do so, he must trek through each of the levels of Hell and then Heaven (which quite literally are both embodiments of the individuals fears or bliss).

Purgatory and Limbo are also domains bridging the gaps between those realms and Earth, and they are touched upon as well.  Although some extreme believers or non believers would take issue with the way I portrayed certain things, I stand firmly by the proof that you can’t make everyone happy.  There were weeks of research into the many religions out there and I really tried to understand the individual perspectives.  My respect for them all is my way of delivering my own type of message and that is that we should all be able to coexist peacefully.

This by far was my most difficult book to write because I wanted it to be something special and inclusive for everyone.  The novel DEVIL’S DESSERT is available for kindle and in print, via links on the right side of the page.  Coming soon will be the graphic comic spinoff DEMONIC ENTITIES.