Day 16 of #scrypthalloween looks at some facts and an excerpt from my #short story DEMONIC ENTITIES. Here’s some little known info: 1) it was my first spinoff from a novel that was not presented in graphic novel form. 2) publication date 9/13/16. 3) the novel that it spawns from DEVIL’S DESSERT, focuses more on the evils that humans are guilty of with the demons influencing or feeding off of that. The short story allowed me to focus more on the fantastical elements of demonology, presenting the lore to a wider audience. 4) the cover is comprised of multiple photos of my fire pit merged together. In it you can see what appears to be faces and sprites bringing the fire to life in an eerie manner. 5) I studied a list of over 9,000 demon and angel identities to properly portray something from every faith.

On the 5th Day of Christmas… 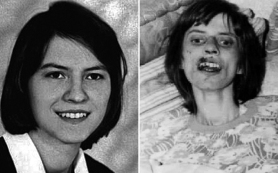 ON THE FIFTH DAY OF CHRISTMAS MY TRUE LOVE SENT TO ME… 5 DEMON SPAWNS!

Okay, so Christmas is not about demons at all, but my novel DEVIL’S DESSERT or its spinoff short DEMONIC ENTITIES make for great gifts.  This was perhaps the most extensive research I’ve had to do for any of my books because I wanted to respect all faiths.  I spent months reading the various main texts and made notes comparing them.  There were so many similarities among them that I even went back further into polytheism and saw a common origin point.  It is quite intriguing to say the least.  Depicted on the left is Anneliese Michel.  She died at the age of 23 with the causes believed to have been demonic possession.  Look up her story as it is too much to post here.  Do you think she was possessed or had some sort of mental disease?

Order a copy of my novel or short for yourself or a friend.  If you want personalized copies then shoot me an email (Rickpipito@hotmail.com), otherwise they can be purchased in print or digital at Lulu.com or on Amazon.

Day 10 of #scrypthalloween looks at my short story DEMONIC ENTITIES. The cover was a blend of pics taken by @homemadedelish of our active fire pit and then altered to have hidden things such as faces and dancing sprites. The longer you look at it the more you see….

official description: You pray, but something within you screams out. Your conscience flees, leaving you alone with your vices. No longer can you control your actions as the evil emerges. The demon has arrived, and none are safe. This short story follows the events in the novel “Devil’s Dessert.” The demons of the 7 deadly sins aren’t killed that easily.

Book is available in print at lulu.com or as part of the Pandora’s Chaos trilogy at Amazon and Barnes and Noble sites.

31 Days of Halloween continues, and here’s a post about my 5th novel, DEVIL’S DESSERT.  Different religions have different depictions of God, the Devil and the countless angels and demons.  Trying to take them all into account can be a tedious task, but it was well worth it in the end.  So just how does a book about demons respect each faith?

In truth, it probably doesn’t.  It’s too controversial of a topic to delve deep into it, but I can say I tried to make them all the “real” faith.  Though I was raised Catholic, I’ve learned to respect everyone’s beliefs or disbelief.  Luckily for me, there is a lot of common ground with which to work here.

This book’s version of “God” and the “Devil” are unique.  Instead of calling them those nouns, I described them as the yin and yang of sorts.  It is about the eternal war between light and darkness (good and evil).  After reading DEVIL’S DESSERT you could come to the conclusion that these entities are not the true God and devil or that they are.  It is up to the reader to decide at this point.

Lux Lucis was the name I gave to the embodiment of Light (God).  The name is derived from Latin meaning “The One Light”.  Tehum, on the other hand, means Darkness, and is the name I gave the dark entity (the Devil).  Their goals differ from one another, so they aren’t necessarily good or evil because they must co-exist in order for the universe to continue forward.  It would be oblivion without the other, yet only the Light seems to know this.

From Light was created darkness, and from them the angels and demons.  For the main angels I took common archangel type characters (Michael, Raphael, Metatron, etc) and had them each as representatives for a heavenly virtue.  The same goes for the demons representing vices, only with the demons, common names for the devil were used.  In other words, I chose to use the name Satan as the demon of wrath, while Lucifer is an entirely different darkness, both of which are separate from the actual “devil”.

There are other minor angels and demons on each side, but those are not the focus of the story.  The war between heaven and hell finally has a grand battle on earth with humanity stuck in between, searching for a way to remain a separate side.  While some have chosen a side, our main characters have preservation of the human race in mind.  In other words, they are saying “Take your war somewhere else.”

When it came to my depiction of Hell, I relied heavily on Dante’s Inferno for ideas.  I always loved the painting and felt that it was as true a representation as could be.  I took those ideas and tied them in with the descriptions of hell from the Bible, the Torah, the Koran, and others texts.  Then I created the place with my own additional thoughts.  We see a moment where Cain is seeking revenge and wants to kill “God”.  In order to do so, he must trek through each of the levels of Hell and then Heaven (which quite literally are both embodiments of the individuals fears or bliss).

Purgatory and Limbo are also domains bridging the gaps between those realms and Earth, and they are touched upon as well.  Although some extreme believers or non believers would take issue with the way I portrayed certain things, I stand firmly by the proof that you can’t make everyone happy.  There were weeks of research into the many religions out there and I really tried to understand the individual perspectives.  My respect for them all is my way of delivering my own type of message and that is that we should all be able to coexist peacefully.

This by far was my most difficult book to write because I wanted it to be something special and inclusive for everyone.  The novel DEVIL’S DESSERT is available for kindle and in print, via links on the right side of the page.  Coming soon will be the graphic comic spinoff DEMONIC ENTITIES.