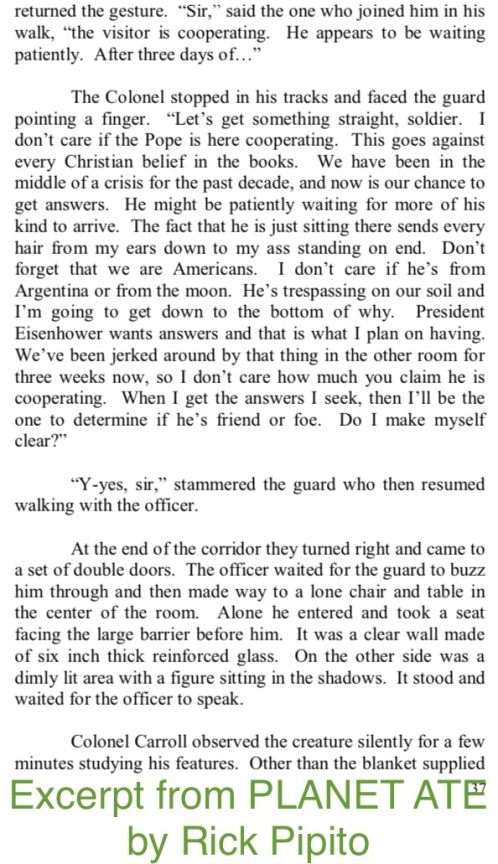 Day 20 of #sCrypt Halloween is all about #conspiracy in my #novel PLANET ATE. Here are some facts: 1) it was published on March 7, 2016. 2) the cover is a recreation of a dry erase board similar to one I have in my office with notes on the current #WIP. 3) although #aliens are a central focus of the #book it focuses more on the government coverup as to them existing. 4) The Apollo missions, The Book of Ezekiel, Neanderthals, Noah and his Ark, Area 51, the Hollow Earth, the Holy Grail, Easter Island, Egyptian Mythology and more are all incorporated into the plot. 5) before each chapter is an actual quote made by important figures in our history regarding the existence of extra terrestrials. What is your favorite conspiracy?

Day 3 of #scrypthalloween is all about my BEYOND HUMAN TRILOGY. Some facts: 1) even though it’s a trilogy it contains six books. A trio of novels and their spinoff shorts (GENETIC MORSELS, PLANET ATE, DEVOURED UNIVERSE, EVOLVED MUTATIONS, ALIEN ENCOUNTERS, and COSMIC ORBITS). 2) the collection was published originally on February 7, 2017. 3) The cover art by @pintsizedpages @dpipito is inspired by #leonardodavinci ‘s Vetruvian Man. On it you can see an amalgamation of the topics from the books (evolution, aliens, and conspiracies). 4) there is bonus content in the print version of the trilogy including an insignia and hint at what is to follow. 5) it’s available in print at Barnes and Noble and lulu websites as well as on Amazon. #book #trilogy #novel #alien #halloween #conspiracy #evolution #geneticengineering

Roberta and I chat about a loud boom we heard that apparently has been happening a lot.  Plus there’s some more strange things happening around the world.  Have you heard the booms?  What do you think they are?  Here’s the episode link to youtube.  Enjoy!

On the 8th Day of Christmas…

Conspiracy theories have been around for ages, but with the internet at our fingertips and technology booming it’s becoming harder to dispute a lot of them.  In fact a lot of them even become much less far fetched sounding once you start looking at the different points of view and available facts.  For my novel PLANET ATE and its spinoff ALIEN ENCOUNTERS I stuck mostly with conspiracies regarding extra terrestrials.  Depicted here are some ancient glyphs that appear to have flying craft in them.  It’s just one of the many pieces of “evidence” toward some of these claims.  What is your favorite or most fascinating conspiracy theory?

Order a copy of my novel or short for yourself or a friend. If you want personalized copies then shoot me an email (Rickpipito@hotmail.com), otherwise they can be purchased in print or digital at Lulu.com or on Amazon.

Day 23 of #scrypthalloween looks at my BEYOND HUMAN TRILOGY. @dpipito did the cover art as a tribute to DaVinci’s Vetruvian Man. It shows a figure that is not quite human, but something else. You can see human traits in one of the images. The #book includes the #novels: GENETIC MORSELS, PLANET ATE, and DEVOURED UNIVERSE, plus the spinoff short stories: EVOLVED MUTATIONS, ALIEN ENCOUNTERS, and COSMIC ORBITS. There is also a bonus log entry at the end, which acts as a bridge between the end of this trio and the beginning of next…

official description: GENETIC MORSELS introduces the new generation to our world, but their arrival brings with it the next step in human evolution. As the first world leader begins to unleash an army of super clones for his twisted plans, the young heroes must figure out how to stop him at all costs. Can they resist the enemy or will their own abilities prove too difficult to harness? PLANET ATE follows the corrupt trail left by a politician into buried secrets about the history of mankind. An organization called the A.T.E. will race against the clock to uncover the truth about visitors to our world. If they fail, an extraterrestrial threat will succeed, bringing with it mankind’s extinction.
DEVOURED UNIVERSE takes a crew of unlikely astronauts into deep space. As they follow a transmission from a nearby galaxy, they will discover that science fiction holds much fact. Their journey will send them to other worlds to seek out an element and alliances, in order to halt the eradication of reality itself. –

Available in print and digital at Lulu, Amazon, and Barnes and Noble sites.

Day 16 of #scrypthalloween looks at my short story ALIEN ENCOUNTERS. The cover photo is a known public domain work that I had some fun editing. It’s connected to one of the biggest alien conspiracies of all time, which is perfect for representing what’s in the pages….

official description: A phone call from a friend leaves you frantic. He claimed to have uncovered a conspiracy that could get him killed. His final words were, “I’ve seen them. We aren’t alone,” right before the line went dead. Whoever intercepted the call may now have you in their sight. Delve deeper into the mysteries established in the novel “Planet ATE”.

Alien Encounters is available in print at lulu.com. On Amazon in digital as well as Barnes and Noble as part of the Beyond Human Trilogy print edition 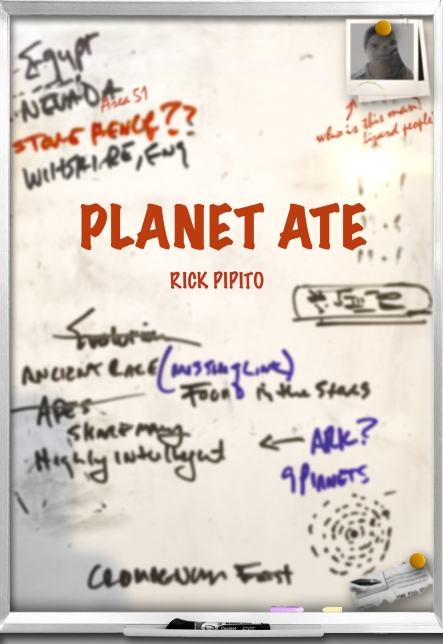 Day 15 of #scrypthalloween takes a look at my novel PLANET ATE. With a dry erase board for the cover art by @dpipito this book delves deep into #conspiracy . I had to research a great deal of the theories out there to bring this story to life, and it was some of the most fun research I’ve ever done…

official description: Throughout the ages human history has held many unsolved mysteries. Why were we created? Were we a product of evolution? Were we created by God’s hand? Or is the answer more complex? When a creature as ancient as the universe itself targets earth for destruction, the truth must be revealed. Enter the A.T.E., a group of government agents dedicated to uncovering that, which has been hidden for so long.
But by looking into past UFO and alien conspiracies, they may not be prepared to deal with truths that will provide proof of our real origins. An extinction event, a Biblical hero, a pilot lost at sea, an artist, and a founding father are only some who held clues to the overall puzzle. Will humanity solve it in time to stop the threat from above?

Available in print or digital at lulu.com and on Amazon as well as part of the Beyond Huma trilogy at Barnes and Noble website. 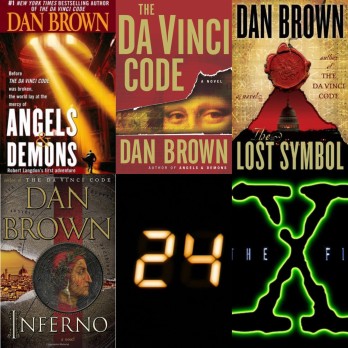 My novel PLANET ATE and its spinoff ALIEN ENCOUNTERS may have an extraterrestrial threat in them, but the main antagonist is the government itself.  Countless cover ups and hidden truths are holding the keys to survival, but finding the facts prove to be a difficult task for the heroes of the story.

Conspiracy is what inspired the idea behind me writing these.  I wanted to account for some of the many theories out there, and take it to a whole new level.  I’m fascinated by how convincing some of these ideas are, and though I’ve personally thought many of them to be ridiculous theories, I have to admit there are some I may have bought into.

So what kind of conspiracy stories do I enjoy?  Here’s a few of my favorites:

The TV series 24 will always hold the title.  I’ve loved that show since episode 1, and haven’t missed a beat.  At times it goes a little overboard with Jack Bauer’s ability to survive, but that’s the best part of it all.  I’m excited to see what they do without him as the main character when 24 LEGACY starts next year.

Another series that influenced me is THE X-FILES.  When I was a kid I enjoyed the show, and now that it came back I’m eager to see more.  From the campiness at times, to some awkward humor, it keeps the story fresh.  You may go into one episode laughing at how ridiculous it is, and the next terrified of what is going on.  It is the perfect embodiment of what the government is capable of.

Finally is Dan Brown’s Robert Langdon series of books.  ANGELS AND DEMONS, THE DAVINCI CODE, THE LOST SYMBOL, & INFERNO are must reads for anyone who is into this sort of thing.  Sure the movies were good (and yes I’ll be reviewing Inferno sometime soon), but the books really intrigued.  Though there always seems to be a year and a half to two year gap between Brown’s releases, I feel they are worth the wait as he captures a real feel and as many facts as he can in order to tell a convincing story.

What are some of your favorite conspiracy theories, movies or books based on them?  Do you have any theories of your own you’d like to share?  Please feel free to comment and post.  Use the hashtag #scrypthalloween and you will be placed in the running for one of my book giveaways! 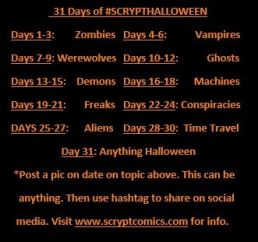 The title of my novel PLANET ATE was the hardest to come up with of my books so far.  It’s because of that extra thought that it has the most meaning of them all.  First off, in the book the main government organization in charge of dealing with the antagonist is the Alien Threat Elimination organization… A.T.E.

It doesn’t stop there however.  This is also book # 8 in the series (Ate instead of eight), AND it keeps in line with the food related theme with the past tense of eating.  All of the fun entendre aside the title is just the beginning.

For the previous book, artist Dan Pipito did a chalk board layout.  Here we see a briefing room like white board.  It’s designed to look like a dry erase board with pictures held on as to what information they have.

In writing PLANET ATE I wanted to go beyond just an alien threat and have it focus more on conspiracy.  There are countless conspiracies talking about the cover up of UFOs, alien life forms, and so much more.  I went with that line of thinking, and exposed (in the story) the truth behind these.  The characters go so far as to figure out why we were created, and what is coming to end us.  I tried to do it in a way where God and science could go hand in hand.  It’s a wild ride that after you read will have you truly wondering what truths are being hidden from us.

Throughout the ages human history has held many unsolved mysteries. Why were we created? Were we a product of evolution? Were we created by God’s hand? Or is the answer more complex? When a creature as ancient as the universe itself targets earth for destruction, the truth must be revealed. Enter the A.T.E., a group of government agents dedicated to uncovering that, which has been hidden for so long. But by looking into past UFO and alien conspiracies, they may not be prepared to deal with truths that will provide proof of our real origins. An extinction event, a Biblical hero, a pilot lost at sea, an artist, and a founding father are only some who held clues to the overall puzzle. Will humanity solve it in time to stop the threat from above?

PLANET ATE is available in print at lulu.com and on Amazon in digital.

What are some of your favorite conspiracies?  Make sure to hashtag #scrypthalloween in your answer, and you may win a free copy of one of my novels.

My most recent novel has gained some momentum recently, so why not add to the hype with this new trailer?  PLANET ATE is available in print at Lulu.com and for Kindle on Amazon.