Since it is a Sunday I figured I’d repost this little strip that Dan and I worked on.  The Adventures of Munchies and Deedoos was meant to be a sunday funny type of comic strip.  We’ve got more plans to release these free little stories down the line.  The concept was simple.  Munchies is based on my daughter, Deedoos on my son.

With Munchies, we wanted her big brown eyes and curly hair to be a part of the character.  With Deedoos we wanted a machine that eats everything and is kind of just all around fun.  So, Munchies ended up being an alien with wavy hair like it has a mind of its own; and deedoos ended up being a robot with a pajama butt flap that when it falls you can see his gears.

The idea behind this first story is about the BEASTER BUNNY.  I remember my daughter called the Easter Bunny that when she was real young.  I immediately had this concept for a children’s horror tale.  The Beaster Bunny is all about what a child’s perspective would be in a candy eating frenzy.  From the Belly aches of too much candy, to the thought of what the “Easter Bunny” really is.  Enjoy and stay tuned for further adventures.

Here it is.  Munchies and Deedoos #1: Tale of the Beaster Bunny.  This is sCrypt comics’ new project that will be free for all of you to enjoy and share.  Part of an ongoing comic strip that will be released here with a variety of artists, this is a family friendly, and comedic adventure between two characters that will make us all feel like kids again.  Enjoy, and please let us know what you think.  Munchies and Deedoos #1: Tale of the Beaster Bunny is (C) 2013 by Rick Pipito, written by Rick Pipito, art and character design by Dan Pipito.

Dan can be reached by email at dpipito@gmail.com as well as on twitter @dpipito. 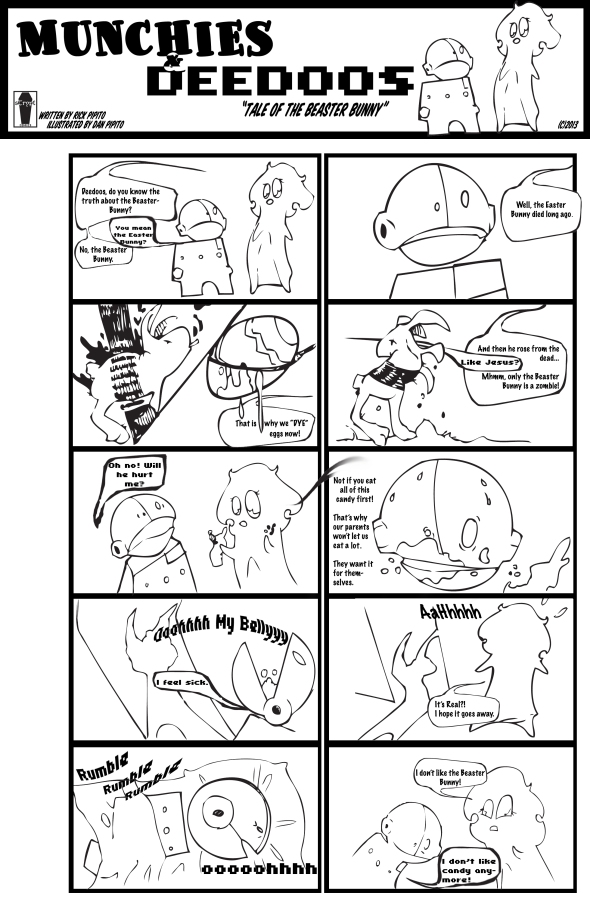