Since Time Travel is the focus for the next 3 days, I figured I’d talk briefly about my upcoming new trilogy.  This is a concept I’ve been throwing around since August of 2000.  I kept putting it aside until it felt right.  Now’s the time.  The CONTINUUM trilogy will include time travel.  Each novel will utilize it in different ways.  The logo depicted above is the emblem on the flag of the Continuum group.  Here’s the three books (the first of which will be coming in February of 2017.)

A COURSE FOR HUMANITY will begin in the future, where an organization known as Continuum will witness the end of their reality.  They must break the rules of never utilizing time travel to go back and correct the event that leads to the annihilation of planet Earth.  Their only hope may be the man they fear the most, but can he be trusted?

THE THIRST OF CAIN will find a sole survivor of a forgotten organization traveling into the past to assassinate the world’s most evil person who has ever lived.  In each time period he finds that he must travel back further for the answer on how to eliminate this seemingly immortal being.  Will he make the ultimate sacrifice to stop the threat?

CONSUMED BY WAR will close out the trilogy.  One man who has gained the secret to eternal youth is equipped with the knowledge of every historical event on Earth.  Beginning at the start of humanity’s rise to power he must survive each era while protecting the secrets that would destroy civilization itself.  Can he prevent the world from being erased before it has time to begin?

New heroes, new villains, and a familiar past make the future something worth looking forward to.

What are some of your favorite time travel stories or related things?  Make sure to hashtag #scrypthalloween and you may win a copy of one of my novels! 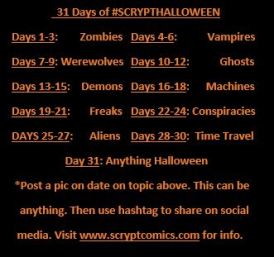