I’ve fallen behind in my blogging duties, so I figured I’d play catch up by doing a quick set of reviews, and then get back to working on the other projects at hand.  Warning, there will be some spoilers ahead.

: While I thoroughly enjoyed the first Kick Ass movie, I was torn with this installment.  Half of the movie, in my opinion, was atrocious, while the other half was exactly what the title says “Kick Ass.”  I almost lost interest a few times, but then was surprised by a lot of what the first one had going for it.  Acting wise, I think the cast was overall decent.  I just think at this point that I’d rather see a Hit Girl movie, as she was really the focus of my interest.  The character is so messed up and conflicted, but it works well.  Don’t get me wrong, the other characters are great, but the whole thing with Kick Ass joining a group of wannabe heroes seemed too far fetched for me.  I realize it is a comic book adaptation, but it seemed like they were stretching.  I enjoyed the consequences of everyone’s actions.  Police chasing down costumed vigilantes made it feel like a real setting, but the end battle with a warehouse of heroes and villains was more a color show of costumes than actually feeling like a realistic battle.  It was very anti-climactic.  Do I want a sequel?  Yes.  The end credit scene made me say “Okay, I want to see what’s next with Hit-Girl, Kick Ass, and the Mother-F$&#er.  All in all not the worst comic book movie, but certainly not the best.  I give it 4 out of 10 sCrypt coffins.

RED 2: A highly underrated film in my mind.  RED 2 was an equivelant follow up to its predecessor.  It actually gave me interest in picking up the graphic novel for which it’s based.  It was campy in spots, but witty campy.  John Malkovich had me laughing every time he was on screen, but it wasn’t just his show.  The rest of the cast really had great screen chemistry with a good story.  Anthony Hopkins stepped into a delusional type of role, which proves that even at his age, he is willing to try something new.  I recommend both this and RED 1 for anyone who enjoys a good action movie, that doesn’t take itself too seriously.  I give it 6 out of 10 sCrypt Coffins.

JLA Adventures: Trapped In Time:  This is a last minute Target exclusive aimed toward younger comic audiences.  It brought back some nostalgia of when I was a child, as it felt like an updated version of the old Super-Friends cartoons.  (Coincidentally, there are 2 bonus Superfriends episodes with the special features).  For the price, it was worth it if you have children.  If you are a fan of the normal animated DC movies; however, I recommend skipping it.  Here’s why.  The story first of all, is a good concept, but there are too many loop holes opened.  Granted, this is bound to happen with a time travel element, but the loop holes are so big that a lot of the movie doesn’t make sense.  I did like seeing the Legion of Doom battle against the Justice league, as well as the addition of Karate Kid and Dawnstar.  Voice acting was subpar, and the movie ended with a cliffhanger that will anger me if I don’t see what happens.  This should not happen in a movie I don’t find entirely enjoyable.  Maybe I’m being too picky.  The good news is that my son (he is about to turn 4 years old) LOVED it.  He set up his own Justice League vs Legion of Doom scenario afterwards.  Look, the movie was obviously a tribute to the past (pun intended), but unless you are under the age of 12, I don’t think you’ll find it that great (because of the plotholes).  I’ll give it 3 out of 10 sCrypt Coffins. 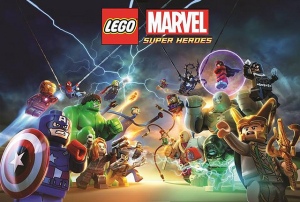 LEGO Marvel Superheroes (videogame): LEGO has continued to pump out video games that contain endless hours of amusement.  Getting the rights to use Marvel characters instantly had me thinking…. They did DC, and now Marvel?  Maybe we will get a crossover game (because let’s face it, that’s the only way we will see the two rival companies on screen together).  Anyway, like LEGO Batman 2 DC Heroes, this game has a very open world environment where you travel to each of your mission points.  The story involves SHIELD directing the heroes to stop Loki and Galactus.  Even after the main plot, there are other sub stories around the map.  I’ll tell you this… If you have never played a LEGO game, then it is worth unlocking EVERYTHING in the game.  There are cheats that you can earn by going to Deadpool’s room in the Helicarrier, and while I don’t normally like to cheat in a game, it is the only way to earn money faster, which you need to unlock everything.  Oh, so what do you get for 100% completion?  Well aside from the over 150 selectable characters, you get Stan Lee himself (yes voiced by him too).  He is as entertaining as Deadpool’s commentary, and his powers?  well, it is worth you earning him to see just what he can do.  The DLC for the game wasn’t worth the purchase in my mind, as I got everything I wanted and more.  Now to wait for the sequel.  Until then, it gets 10 out of 10 sCrypt Coffins. 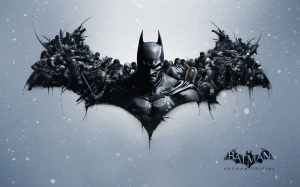 Batman Arkham Origins: The Arkham games are probably the BEST comic book related games out there.  Origins, while not surpassing the previously released titles, did a good job of keeping the feel.  There is more detective work to be done, and Batman is fairly new to crime fighting, so his combat skills need to be utilized in ways to take down a group.  Like Batman, this game forces you to think before acting.  Running into a room full of guys with machine guns will not help you save the day.  Kevin Conroy and Mark Hamill have been replaced as Batman and the Joker’s respective voices, but their replacements nail it spot on.  Voice acting is perfect, the story is outstanding, and the choice of villains is wonderful.  My only complaint is that even after defeating 100% of the game, you never actually capture some of the villains.  Those that get away are obviously to set up the first game, but it leaves you wondering why Batman isn’t good enough of a detective to stop them.  Riddler being my biggest complaint, as his puzzles just ended with not finding him.  My other complaint is the use of Electrocutioner’s gloves.  To me it felt like I was cheating when I used them, though there were times when they were needed.  I have not played the online multiplayer games and honestly I have no desire to, but I did get the Deathstroke and the Bruce Wayne DLC.  With the latter, it takes you even further back into the origin of Batman to when Bruce Wayne was training with Master Kirigi in the mountains.  This DLC was a welcome addition, albeit extremely difficult.  I can only hope the announced Mr. Freeze DLC comes soon.  All in all, I give it 7 out of 10 sCrypt Coffins.

So what did you think of any or all of the above?  Do you agree?  Have anything to add?  Disagree?  comment below.