To round out the trilogy of trailers I’ve done, here’s the one for SOULS 4 SUPPER.  I’ll be working on more with different approaches for the novels I haven’t done a trailer for yet.  Enjoy and share! 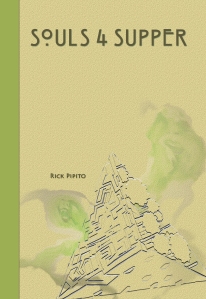 Now that we’ve covered the first trilogy, let’s take a peek at the beginning of the next one.  Book 4, which can be read on its own or as part of the series is a great starting point for anyone who wants to just jump in.  When I decided to write SOULS 4 SUPPER, I had personal experience and those of others as inspiration.

This book focuses on ghosts, spirits, hauntings and lost souls, and it can be a very controversial topic.  I’m not saying I believe or disbelieve in any of the aforementioned, but I do feel that at the very least our minds connect us to a different plane of existence… you can call it a higher power, or the afterlife, or just a figment of our imagination, but something is there.

When I was in grade school, I remember as plain as day being tucked in to bed one night.  About fifteen minutes after my parents turned out the lights my grandfather walked in to speak to me in his soft voice.  He stood in my doorway at the foot of my bed and silhouetted by the hall light (which seemed very bright) he told me “Ricky, don’t worry about anything.  It will all be okay, and I’m always going to be watching over you.”

I was very young, but this stands out in my mind today, even though his facial features seemed distant.  The one thing that I thought was odd back then was that my pop-pop didn’t live with us.  We saw him maybe once a week and for that hour it was strange but I thought nothing of it and went to sleep.  The next day my dad picked me up at school halfway through the morning.  I knew something was wrong because he’d never pull me out of school.  He wouldn’t tell me why, and when we were halfway down my street I said, “Dad, it’s pop-pop isn’t it?”

His eyes began to tear, and my dad who almost never cries wanted to know why I said that.  I noticed he had slowed the car to an almost stop in the middle of the road as he stared at me.  When I told him about my visit the night before, he lost it.  My grandfather had died around the same time I had the “dream” the night before.

Similar things happened afterwards with other family members, but not quite so distinct.  When my other grandfather died I remember seeing his cancer ridden body lying in a coma.  He’d been unconscious and we’d all known he was going to pass soon.  When I kissed him on the forehead and said “Goodbye” I knew it was the last I’d see him.  I felt something in my heart and I swore the corner of his mouth curled upward (almost smiling) but very faint.  Minutes after I left he died.

Then there was my grandmother who had Alzheimer’s disease yet even though she was incoherent in her speech at the end, the last time I saw her she had a burst of coherent speech and knew who I was.  It was the end and her body and mind reached out to me one final time. 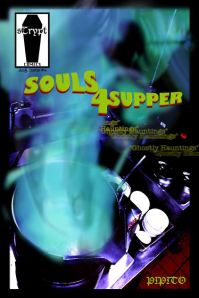 Okay, so you’ve heard the depressing side of it all, but there is also a good side.  When my daughter was 2 months old we went to Jim Thorpe, PA for my uncle’s annual Christmas party at his Bed and Breakfast.  We slept in the attic, which is a small library room and my little Lana was smiling in her swing chair late at night.  Normally this wouldn’t be strange, but she was doing so and staring in the corner in a way that it seemed she was interacting with someone.  I got up to see what she was looking at, but saw nothing there.  She stopped smiling when I stood where she was looking and I felt a sudden degree drop in the room.  Now the attic is a cold place that time of year and maybe the nostalgia of the antique building, plus the glasses of wine I’d had, were messing with my mind.  Who knows?

Later that night I’d woken to use the restroom a floor down and was surprised that there were still people awake.  When I reached the bottom of the stairs there was no one there.  The voices that I’d heard and the movement in the dim lighting that I’d seen must have been sleep in my eyes.  I used one of the two bathrooms that were open, and when I’d exited to return to bed, the other door had closed.  There were no drafts in the hall, and no one was in the restroom.

Now again, all of these experiences, and a few others I’ve had could have been tricks of the mind, or a mental state I was in.  No matter what it was, the experience fascinated me.  I was never freaked out until after I’d thought of it.  (I still look forward to going to the bed and breakfast each chance I get).  Those personal ties, plus ones of many others I’ve read over the years made me want to write a book about ghosts, hauntings etc.  There are many different “stories”, and I wanted to include as many as I could and have it make sense in a larger setting.

Be sure to check out SOULS 4 SUPPER and its graphic comic spinoff, GHOSTLY HAUNTINGS in multiple formats through links on the right side of this page.  Also, I highly recommend checking out my Uncle and aunt’s place http://www.timesjimthorpe.com.  The bed and breakfast is romantic, the owners are amazingly awesome, and the whole town just has that old time feel.