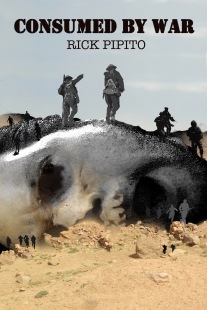 It’s release day for my new novel CONSUMED BY WAR!

Here’s the description: Since the dawn of time there has been conflict driven by something sinister behind the scenes. When two men cursed with immortality discover secrets hidden in the Dead Sea Scrolls, one of them uses the knowledge in an attempt to bring humanity to judgement. In a race that spans time, these two eternals travel to various locations around the globe to seek out ancient artifacts of legend. They meet and inspire key historical figures, while leaving their marks on history and igniting wars. No matter who becomes victor of this conflict, one thing is for certain… humanity won’t be prepared for what’s to come.

and in digital for $3.99 at Consumed By War digital purchase

This entry was posted on July 2, 2019 by scryptpublishing. It was filed under My Published Works and was tagged with book, Consumed By War, Eternal Hunger Saga, History, new release, Novel, release date, Rick Pipito, war.