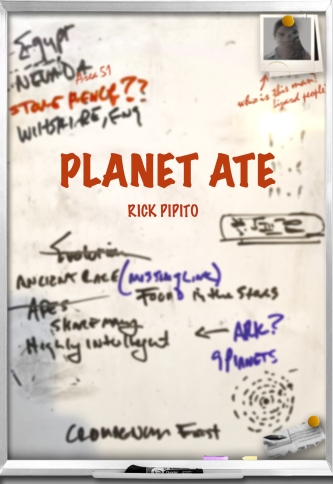 The title of my novel PLANET ATE was the hardest to come up with of my books so far.  It’s because of that extra thought that it has the most meaning of them all.  First off, in the book the main government organization in charge of dealing with the antagonist is the Alien Threat Elimination organization… A.T.E.

It doesn’t stop there however.  This is also book # 8 in the series (Ate instead of eight), AND it keeps in line with the food related theme with the past tense of eating.  All of the fun entendre aside the title is just the beginning.

For the previous book, artist Dan Pipito did a chalk board layout.  Here we see a briefing room like white board.  It’s designed to look like a dry erase board with pictures held on as to what information they have.

In writing PLANET ATE I wanted to go beyond just an alien threat and have it focus more on conspiracy.  There are countless conspiracies talking about the cover up of UFOs, alien life forms, and so much more.  I went with that line of thinking, and exposed (in the story) the truth behind these.  The characters go so far as to figure out why we were created, and what is coming to end us.  I tried to do it in a way where God and science could go hand in hand.  It’s a wild ride that after you read will have you truly wondering what truths are being hidden from us.

Throughout the ages human history has held many unsolved mysteries. Why were we created? Were we a product of evolution? Were we created by God’s hand? Or is the answer more complex? When a creature as ancient as the universe itself targets earth for destruction, the truth must be revealed. Enter the A.T.E., a group of government agents dedicated to uncovering that, which has been hidden for so long. But by looking into past UFO and alien conspiracies, they may not be prepared to deal with truths that will provide proof of our real origins. An extinction event, a Biblical hero, a pilot lost at sea, an artist, and a founding father are only some who held clues to the overall puzzle. Will humanity solve it in time to stop the threat from above?

PLANET ATE is available in print at lulu.com and on Amazon in digital.

What are some of your favorite conspiracies?  Make sure to hashtag #scrypthalloween in your answer, and you may win a free copy of one of my novels.

This entry was posted on October 22, 2016 by scryptpublishing. It was filed under Fun facts, Uncategorized and was tagged with Aliens, book, Conspiracy, Novel, Planet ate, Rick Pipito, scrypt publishing.