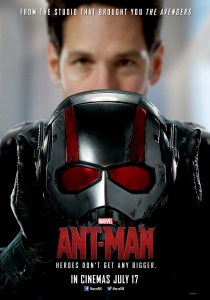 I’m a bit late on this one as I’d seen it weeks ago, but got tied up with multiple projects.  I’ll post some spoilers in here, so if you just want the basic review, scroll down to the final paragraph.

At first I’ll admit (much like I did with Thor and Guardians of the Galaxy) that I wondered how they were going to make a movie from a background character and make it work.  I have always loved the character of Ant-Man, but to stand alone in a feature film was another whole story.  I had faith in Marvel, and was pleasantly surprised with one major problem in story writing.  Here’s my breakdown:

Scott Lang / Ant-Man II: Paul Rudd did an amazing job.  He was a criminal with a purpose.  He stole in order to pay child support so he could see his daughter.  Sure this seems like something a derelict would do, and does, but in this case you could actually see Lang cares immensely for his little girl.  She’s his world.  Once he is unexpectedly in this micro sized world of Ant-Man it takes a lot for him to become a hero.  I like his struggles and lightheartedness despite the serious situation.  It was also set up for him to become Giant-man later down the line because of the fact that he was able to make it to the feared micro-verse and come back.  Supposedly there was an easter egg hidden in the microscopic world, but there was so much to take in I missed it.  The visuals were absolutely stunning.

Hope Van Dyne / Wasp II: Evangeline Lilly played the part well, and I echo her words in the mid credits scene “It’s about time.”  This is in reference to her becoming the Wasp, much like her mother before her but in an updated suit.  I have no problem that this skips over the whole original Wasp for the most part.  It makes sense in this movie universe.

Paxton, Luis, Kurt & Dave:  The Paxton character made sense and was a welcome part, but Luis and Dave seemed a bit too goofy for me.  Sure I know it was supposed to be (and IS) humorous, but I couldn’t take them seriously… especially Luis.  Kurt also bothered me because his accent seemed off.  They were fun supporting characters, but short of Paxton I could have done without the others.  They DO work in the lightheartedness of it all however, so its less a complaint than it is an observation.

Sam Wilson / Falcon: Anthony Mackie’s surprise appearance in the film tied it in perfectly to the rest of what has happened so far.  The fight between Falcon and Ant-Man was epic and a great tease to letting the fans want to see more hero vs hero… He not only setup Civil War in that way, but with Bucky and Captain America at the end it all fell in nicely.  Mackie’s character was the perfect choice to take the role here.

Hank Pym / Ant-Man I: Michael Douglas said a while back that he wanted to be in a Marvel movie.  I’ll admit at first that I was skeptical of him being Hank Pym.  Not because of his acting, but because that meant the Ant-Man I grew up with was going to be much older.  They appeased me however by doing some flashbacks.  We saw Peggy Carter and Howard Stark in the beginning of the film, and even Pym working along side a costumed Wasp I / Janet Van Dyne.  The passing of the torch was played well, and the reason for Janet’s absence was well written.

Darren Cross / Yellowjacket: I thought originally Yellowjacket would be the villain way back when this movie was still in development, but I figured it’d have been Scott Lang in the role with Hank Pym defeating him and making him realize the err in his ways.  While I enjoyed the way the character looked in suit and the epic final battle between him and Lang, I was really disappointed.  Here we got another repeat villain.  A bald mad scientist who is trying to take over a corporation by his own means, and becomes the villain.  We saw this in Ironman 1 & 2 practically.  We see it in countless other superhero films as well, so why did they go this route?  To me it felt lazy.  Were the effects and both Ant-Man incarnations not in it, this would have ruined the movie for me.  Darren Cross was too predictable and unoriginal for me.

Stan Lee: Probably the briefest cameo he’s ever had, but still fun to see his face.  This was for me one of his worst cameos though.  This is not a complaint at all.  I’m just stating that it wasn’t the best use of such an icon.

All in all Ant-Man was a fun ride.  Aside from the villain it felt like a fresh and original movie that still fit in with the rest of the Marvel Universe.  I can’t wait to see him link up again as an Avenger in Captain America 3.  Scott Lang is the new Tony Stark as far as wit and personality, and it’ll be good to see the onscreen interaction among them all.  Marvel does it again!  7 out of 10 sCrypt Coffins for a fun and visually stimulating time.

This entry was posted on August 10, 2015 by scryptpublishing. It was filed under Reviews and was tagged with ant-man, evangeline lilly, Marvel, marvel cinematic universe, Movie Review, paul rudd, review, wasp, yellow jacket.