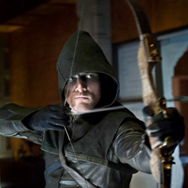 As a fan of the often criticized CW show Smallville, I was still left disappointed by many things in that series. When Arrow debuted last week, my expectatuons were Neutral. I knew it could go for better or worse. It did that on both ends, but I was pleased with the way the show looks to be headed. SOME SPOILERS AHEAD.

The action sequences were outstanding.  Stephen Amell as Oliver Queen/(Green) Arrow, really portrays the part well.  He’s cocky and badass with a cause.  Thea, his younger sister seems to have the nickname “Speedy”.  Whether this is a nod or a possible setup, her drug addiction and attitude could eventually lead to her being his sidekick.  Tommy Merlyn is a nice add as well.  Overall, the suspense, action, and the way the plot is revealed in pieces really drew me in.  I have to do further research into Oliver’s list of names, because I’m sure there are a few on there that are related to the comics.

Katie Cassidy fits well in the role as Dinah “Laurel” Lance.  That being said, I’m not sure I like her being called Laurel.   The take of the no superpowers world and change of Star city into Starling city is ridiculous in my opinion.  Why is it so unbelievable to have a city named “Star”?  Of all the things, the name changes aren’t too serious, but really annoying.  I only hope that the “Arrow” name is upgraded to “Green Arrow” as the series goes on.  Who knows, maybe once Merlyn decides to take up a bow and arrow, they will need the color to distinguish the two.  I can’t imagine Dinah Lance being a great part of the show without having her vocal abilities like in the comics.  Black Canary is Black Canary.  Take that away from her, and we just have a woman who can handle herself in a fist fight.  They could have made up a role for that.  There were also moments that felt like it was a CW show.  Bad dialogue, and trying to fit in that soap opera esque feel at times.  They are going for a darker feel, but to me I only saw that with Oliver’s first kill.  Yes, he only killed once, but was it justified?  Would Green Arrow kill?  I’d say in that situation he did what he had to do, but I really hope the series doesn’t continue on making him out to be the Punisher with a bow and arrow.

All in all, it was really decent and fun to watch.  The inclusion of the Deathstroke mask and what I’ve seen online as trailer material so far really has me thinking this will be a great, fun watch.  Bottom line is, don’t knock it until you see it.  I won’t review every episode, but I will make sure to do a post season report once the first season is over.

What did you think of the show?  Let’s get a Green Arrow discussion going.

This entry was posted on October 17, 2012 by scryptpublishing. It was filed under Reviews and was tagged with Arrow, dc comics, Green Arrow, Stephen Amell.