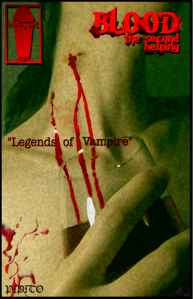 You are alone with someone you just met. You hit it off and lean in to kiss that person, only to realize that their teeth are now two inch fangs. Your “friend” is a vampire thirsting for your blood. Welcome to the second installment in the graphic world of “Flesh And Leftovers,” where vampire legends will make your blood race. One author’s ideas are brought to life by eight talented artists in this graphic spinoff of “Blood, The Second Helping” the novel.

The novel, “Blood, The Second Helping”, lured fans into its vampire mythology. Now, in this graphic spin off, fans will be able to visualize some of the events that happened leading up to and after those events. You don’t need to have read the novel to appreciate the art from 8 different artists.

**Update: This is now available as a text short story.  It can be found in print at lulu.com or in digital form as part of the Eden’s Order Trilogy extras at Amazon.

Joe Parisi is back for a second time with “Hunting The Hunter.”  Before the events in Blood, The Second Helping the novel, Darius Moon is hunted because of what he is.  The military will stop at nothing to get their hands on this vampire.

Asher Humm has returned for a second time and in full color.  “Eternal Guardian” is the story about a vampire who communicates with his natural surroundings.  When a group of archaeologists go searching for the Fountain of Youth, they do not expect what lies in waiting.

Dan Pipito, sCrypt Comics’ co-founder, watercolors two stories in this installment.  “Seeking The Cure” is about a vampire during the Russo-Japanese War who is seeking a cure for his blood lust.  “Samson and Delilah” is a new take on the Biblical story.

Phillip Allie is back for a second time with “The Lying Truth.”  When the CIA blackmail a woman into becoming their assassin, they aren’t prepared for her vampiric backlash.

Leanne Wiedmeyer returns with “Wine And Dine.”  They say that wine is good for your blood… that is unless you go to the Time and a Bottle winery.

Sakura Jones brings in new talent with “A Monument To Serve.”  Ancient Egypt holds many secrets, but solving the riddle of the sphinx could be the deadliest of them all.

Angela McQuillan is here to present “The Question.”  Bram Stoker’s inspiration comes from this lord of the undead who is building a selective army of his own.

J.C. Spence illustrates “Mind Astray”.  When two of the characters from the novels exist in the same body, they struggle in a dream like state for ultimate control.

Rick, Roberta, and Dan Pipito present the storyboards for “Shadow Stalker.” A medieval vampire hides from his prey until the moment to strike.